In education, humanity is as important as grades

In education, humanity is as important as grades 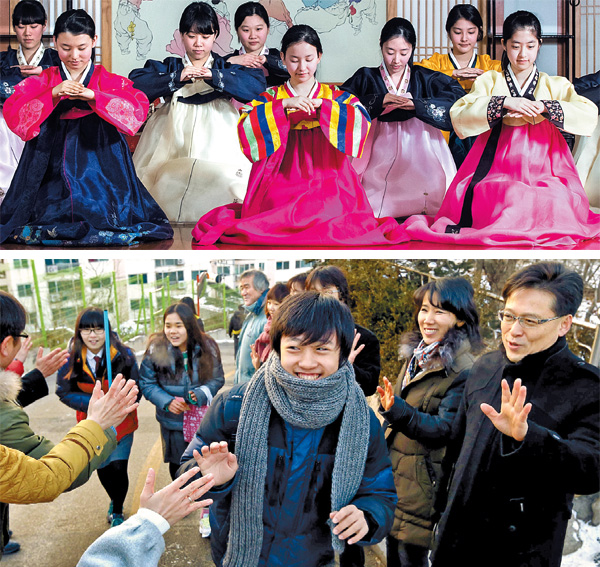 Top: Students of Seoul Girls’ Commercial High School in Gwanak District, southern Seoul, learn traditional Korean etiquette last month. By Park Jong-geun Abovet: At the front gate of the Yeonseo Middle School in Eunpyeong District, Seoul, 10 teachers greet students in the morning. The school operates a series of programs to build character and it said the students’ academic performances have also improved since the programs started. By Kim Hyung-soo


Since its independence from colonial rule in 1945 and emergence from the ruins of the 1950-53 Korean War, Korea has become the world’s 15th largest economy in just over half a century, with many attendant achievements. It boasts the world’s highest Internet penetration of households. The number of students going to college is the highest among developed nations: Nearly eight out of 10 high school students. The level of math and science proficiency among middle and high school students are through the roof. Beautifully engineered products from Korea like smartphones, televisions and washing machines are coveted around the world.

Let’s look at the flip side. A local study on how teens interact in groups showed that Korean teenagers performed poorly compared to kids from other OECD nations. The country’s suicide rate is 2.6 times the OECD average and the highest among the 34 developed nations. Working for the community’s common good and a respect for the law lag behind other developed nations.

At the start of each year, the Joong-Ang Ilbo proposes a master plan of action for the nation. This year, the plan addresses the issue of adding humanity to our already “smart” education and proposes that Korean society come to greater terms with six values: humanity, unity, mastery, action, respect and thinking.

The second part of the master plan, promoting entrepreneurship, will be described in a coming article. 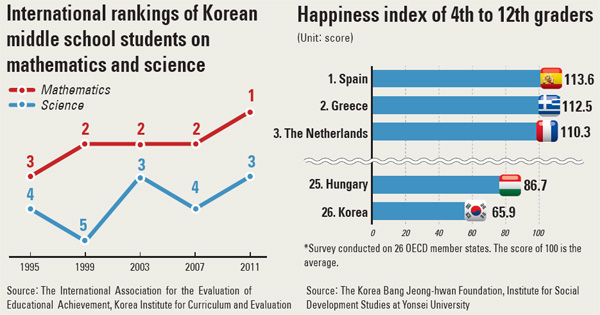 Seoul Girls’ Commercial High School has a reputation for producing well-behaved graduates with a high level of social etiquette. The secret lies in its teachers’ efforts to teach students how to behave with respect toward people, especially their seniors.

The school’s reputation contributed to its success in placing its graduates in jobs at major companies.

Of 175 graduates who applied for jobs this year, 172 were employed. Although a majority earn somewhat narrow vocational certificates, the school’s emphasis on humanism is often credited for its graduates’ success.

“I have heard from human resource officials from major companies many times that new recruits from our school excel in their manner,” said Han Sang-kuk, head of the school.

Yeonseo Middle School in Eunpyeong District, northern Seoul, is another institution that has benefited from a focus on humanism.

Principal Park Choon-gu warmly greets students at the entrance along with 10 teachers every day to generate a sense of being cared for. Park also introduced a rule that requires students who have violated school rules to tend a vegetable garden for as long as a year instead of giving harsher punishments.

Since Park took his job in January 2011, the percentage of students below the basic academic level for Korean declined to 0.9 percent last year from 3.9 percent in 2010.

“The secret behind a boost in a student’s academic performance is a teacher caring for that student,” said the principal.

Narrowing social, ideological and economic schisms has emerged as one of the most urgent tasks for Korean society. The Dec. 19 presidential election displayed the ideological gaps the country faces, as have all elections since democracy was restored in the 1980s.

Samsung Economic Research Institute did a study on social conflicts in countries, including income disparities and democracy levels, and Korea was ranked near the bottom of OECD nations just above Turkey, Poland and Slovakia. The level of social conflict can even be quantified in money terms. According to the institute, 27 percent of Korea’s GDP, or roughly 300 trillion won, is lost due to various social conflicts in the country.

One solution to ease social conflict would be a leader with the ability to empathize with the beliefs and needs of others. The ability to embrace different opinions is a crucial characteristic a leader should have.

People in their 20s should have respect for older people for their hard work and sacrifices that helped make poverty-stricken Korea what it is today.

For seniors, efforts to understand the travails of young men and women in the country are also needed.

“In the past, people wished for a leader who could charismatically rally the country toward a goal,” said Moon Chung-in, a professor of political science at Seoul’s Yonsei University. “But now, we need a leader who will walk with the people to get closer to a common goal shoulder-to-shoulder.

Kim, 43, who works as a service engineer for mobile phones, is recognized for his expertise with over 20 years of work experience. Kim prides himself for being skillful in repairing phones, vital accoutrements to modern lives. Kim told the JoongAng Ilbo he is hurt when he overhears a parent telling a child to study hard in order not to end up a technician like Kim.

“I feel a sense of regret for the unyielding standards society forces upon people when it comes to choosing jobs,” said the veteran technician.

Korean society has strong stereotypes on what jobs are “good” and “bad.” According to a survey of 10,000 high school students conducted by the Ministry of Education, Science and Technology, 20.9 percent of the teenage respondents said they would not work on a production line because of negative social perceptions of people with such jobs.

“As Korean society rushed toward rapid economic development in such a short period of time,” said Chun Se-young, dean of the Graduate School of Education at Chungnam National University in Daejeon, “it became preoccupied with materialistic success.”

As their social enterprise became widely known and the talk of the town, the two founders were offered 1 billion won ($940,733) for the business and were also offered chances to run for proportional representative seats in the National Assembly.

The brothers turned the offers down. They didn’t want to sell out.

The Web site has over 230,000 members and expanded its business to Indonesia, and 15,000 Indonesian students rely on it.

“Many college students have the good will to help others but give up on their ambition because they don’t know how to realize it,” said Kim Sung-tae, who acts as the company’s CEO. “But once you take action to realize your commitment to help others,” he continued, “you will find a way to realize your wish with support from others around you.”

In a testament to its rapid economic progress, last year Korea became the 7th country to join the so-called “20-50 Club,” nations with a population of at least 50 million with a per capita gross national product of $20,000. Despite its fast economic rise, Korean society sometimes lacks respect for the rule of law. According to a study by the Korea Development Institute in 2007, an additional one percent of annual economic growth could be gained if Koreans follow their laws at the average level of fellow OECD nations.

“Humans are more advanced than animals because we create a community called society on which to base our lives,” Professor Choe Jae-chun of Ewha Womans University said. He suggests in order for the Korean society to leap forward, “values such as respect and regard for others should be restored.”

The number of people using smartphones last year more than doubled with smartphone ownership rates reaching 63.5 percent from 31 percent in 2011. Living in the world’s most wired country, people surf the Internet over two hours a day on average.

Ironically, as Koreans adjust their lifestyles to smart gadgets, their lives have become dumbed-down.

“Creativity that could change the course of history comes from the in-depth contents of one’s mind,” said professor Yun Jae-woong of the Korean Language Education at Dongguk University. “Korean society and schools should encourage more in-depth reading and contemplation rather than endless wandering on social network sites via mobile phones.”