Nation struggles to deal with snow

Nation struggles to deal with snow 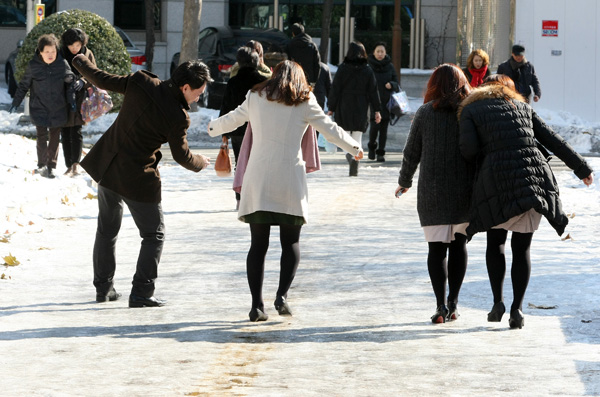 Pedestrians try not to slip on ice caused by snow that fell over the weekend, melted Sunday afternoon and then froze again in Suseong District, Daegu, yesterday. By Gong Jeong-sik


Mr. Lee, a 36-year-old worker in Seoul, wished he had figure skating champion Kim Yu-na’s skill just to get to work yesterday. The snow that fell around his house over the weekend melted Sunday afternoon and then froze over again. It was like an ice rink.

Lee called his local government. “Aren’t you going to do something with this ice? I almost slipped on a street!”

The answer: “We’re trying our best.”

Local governments in Seoul, Gangwon and Chungcheong are trying hard to clear away the snow and ice, but residents say the efforts barely show.

The Seoul Metropolitan Government prepared a total of 50,607 tons of snow removing materials such as calcium chloride and salts for this winter, but 24,000 tons were used up in the last month.

The city government said only 28,000 tons of snow-removing materials were needed in the last five years.

“We have an equal amount of snow removing materials as last year,” a spokesman for the Seoul Metropolitan Government said. “But if it snows as it did in December in the next two month, we think we’ll need to get additional amounts of calcium chloride.”

Chuncheon in Gangwon has already used up its 700-ton supply. It recently received an additional 100 million won ($93,000) government subsidy for snow removal after it depleted 2012’s 350 million won budget.

The Chuncheon city government said it purchased an additional 200 tons of calcium chloride yesterday and it will also secure 100 tons more today and 200 tons tomorrow. It said it generally uses 100 to 150 tons each time it snows.

“It is hard to secure the necessary amount of calcium chloride for this year because it snowed very much in western and southern regions of the country,” a spokesman of the Chuncheon city government said. Chuncheon, which previously had nine snowplows, bought 17 additional ones this year in preparation for the snow.