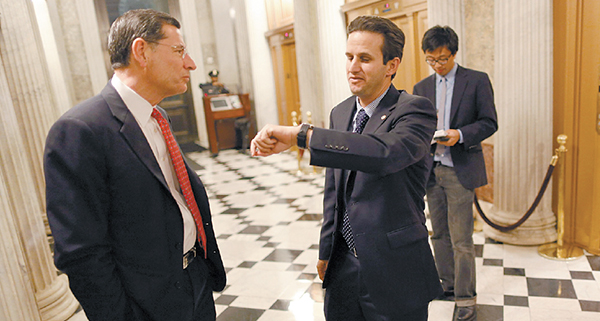 U.S. Senator John Barrasso, left, and Senator Brian Schatz chat about the last-minute timing of the vote on a fiscal cliff-averting deal as they cross paths during the senate vote in the early morning hours at the U.S. Capitol in Washington yesterday. [REUTERS/YONHAP]


The Senate passed a budget agreement seeking to undo tax increases that took effect yesterday for almost every U.S. worker after Congress and the Obama administration allowed a fiscal deadline to expire.

The legislation, passed 89-8 yesterday at two hours after midnight (Washington time), would make permanent the tax cuts for most households that expired at midnight, continue expanded unemployment benefits and delay automatic spending cuts for two months.

The measure emerged from an agreement on Monday between Vice President Joe Biden and Senate Minority Leader Mitch McConnell to stave off more than $600 billion in tax increases and federal spending cuts set to begin this month. The 157-page bill now moves to the House for consideration.

“We all knew that if we did nothing, they’d be going up on everyone today,” McConnell said before the vote. “We weren’t going to let that happen.”

After more than 17 months of bickering, Congress and President Barack Obama have yet to enact a deal to avert the budget changes known as the fiscal cliff.

Even if an agreement clears both chambers of Congress in the coming days, it would be more limited than what Obama and leaders of both parties sought.

The deal passed early today by the Senate would extend income tax cuts for household income up to $450,000, with rates rising to 39.6 percent on income above that level. Expanded unemployment insurance would be continued through 2013.

House Speaker John Boehner issued a statement before the vote saying the House would consider the proposal if it passes the Senate. The House ended business until noon today without taking action on the budget.

“Decisions about whether the House will seek to accept or promptly amend the measure will not be made until House members - and the American people - have been able to review the legislation,” Boehner, an Ohio Republican, said in the statement.

Taxpayers and investors won’t see immediate effects of the changes, which would accumulate over a matter of months. By acting early this year, Congress could reverse the tax and spending changes.

Boehner “has said all along that he was waiting for the Senate to act,” said Senate Majority Leader Harry Reid, a Nevada Democrat. “Now I hope for America that he will allow the full House of Representatives to vote on this bipartisan legislation.”

Tax cuts first enacted during George W. Bush’s presidency expired Monday night. Obama and other Democrats have sought to extend the reductions for married couples’ income up to $250,000 a year while letting tax rates rise for income above that amount. Republicans oppose tax rate increases for any income level.

Allowing the fiscal changes to take effect would cause a recession in the first half of 2013, according to the Congressional Budget Office (CBO).

If Congress does nothing, taxes will rise in 2013 by an average of $3,446 for U.S. households, according to the nonpartisan Tax Policy Center in Washington.

Tax filing for as many as two-thirds of U.S. taxpayers could be delayed into at least late March. Defense spending would be cut, and the economy would probably enter a recession in the first half of 2013, according to the CBO.
Bloomberg