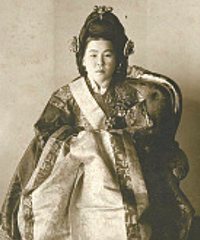 PHOTOGRAPHS OF THE DAEHAN IMPERIAL FAMILY

Deoksu Palace branch of the National Museum of Contemporary Art,

To Jan. 13: This exhibition showcases about 200 rare portrait photos of the imperial family members of Daehanjeguk, or the Korean Empire. (1897-1910).

They had to endure turbulent and tragic lives as the empire was formed amid geopolitical strife and collapsed with the colonization of Korea by the Japanese imperialists.

The exhibits include photos of Emperor Gojong, whose efforts to make an independent, modernized country failed, and his consort and concubines.

The show features several of Deokhye’s belongings, including traditional dresses, jewelry and wedding gifts. They are on loan from the Bunka Gakuen Costume Museum and Kyushu National Museum in Japan to be shown to the Korean public for the first time.

Deokhye was the daughter of Emperor Gojong and his concubine, Lady Yang. As Gojong’s only daughter, she was so beloved by the emperor that a royal kindergarten for her was established in the court. But as the Japanese colonial rule strengthened, she was forced to study in Japan and marry a Japanese nobleman. The marriage ended in divorce as she developed a mental illness. She returned to Korea in 1962 and lived in a building of Changdeok Palace in Seoul until she died at age 78.

Admission is free. The museum hours are from 9 a.m. to 6 p.m. on weekdays and to 7 p.m. on weekends. It is closed on Mondays. Go to Gyeongbokgung Station, line No. 3, exit5.

Moon is “one of the few artists who paint in Korean traditional methods but in a modern sense at the same time,” said Yi Joo-heon, the museum director and art critic.

Moon has traveled all over the country from Jeju Island in the South Sea to Gangwon, northeast of Seoul, to visit various pine forests.

The exhibits include two paintings depicting pine trees in snow, inspired from “Seolsongdo” by Lee In-sang, a poet, painter and calligrapher of the 18th century. The exhibit also includes a painting of the 600-year-old pine tree near Seokpajeong, a hanok (traditional Korean house) that was once the summer house of King Gojong’s father, behind the museum.

To Feb. 24: “Your Invisible Shadow” features elements such as light, shadows and sounds that will please viewers’ senses.

A room on the museum’s third floor is dark, with luminous white silhouettes on its walls and ceiling. All the silhouettes in the work “Parallel World” by Lee Chang-won, look mystic but actually originated from images taken by photojournalists.

On the second floor is artist Shin Sung-hwan’s “Bright.” It consists of a water tank with droplets falling at consistent intervals and the real-time projections of its images with rainbows formed on the walls.

The other work on the second floor is “Breathe” by artist Ha Won. It shows the image of a red dot projected on a screen made of white feathers.

The dot continuously pulsates, in accordance with the sounds of breaths and heartbeats.

Media artist Hong Buhm’s work “Hide & Seek #5” on the basement floor attracts those who are interested in neuroscience and memory. Other participating artists include architects Bae Jung-wan and Hwang Jie-eun, painter and installation artist Lee Ye-seung and poet and music critic Sung Ki-wan

To April 14: Tim Burton, whose movies contain some of the industry’s most unique animation and visuals, has done a number of drawings, paintings and sculptures that are in his private collection.

Curators at the Museum of Modern Art (MoMA) in New York selected some of Burton’s artwork for an exhibition highlighting the American director and producer’s off-screen talent.

The result, the “Tim Burton” retrospective, has now come to Seoul. The exhibition features 860 of Burton’s artworks including drawings, paintings, sculptures, short films, animations and costumes.

The exhibit includes conceptual drawings from Burton’s “Edward Scissorhands” and “Batman” series. Drawings not related to the movies but which reflect Burton’s trademark grotesque fairy tales and dark humor are also included.