Boozers in Seoul getting bamboozled

Boozers in Seoul getting bamboozled 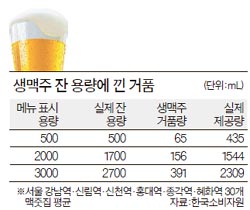 Drinkers who felt like their draft beers were going down too quickly at their end-of-year party may have been more perceptive than they realized, as some pubs in Seoul were found to be over-changing customers by shorting their measures.

The Korea Consumer Agency examined draft beers poured from 30 pubs located near crowded subway stations such as Gangnam and Hongdae, and found that they all under-filled their glasses. The worst offender did so by an average of 23 percent and the most honest by a median of 13 percent.

Some 300,000 kiloliters (79.3 million gallons) of draft beer were sold to retailers in Korea in 2011, making up 16.3 percent of their total beer purchases. Consuming draft beer with fried chicken is so popular in Korea that locals have even coined a word for it: chi-maek (maekju is the Korean word for beer). 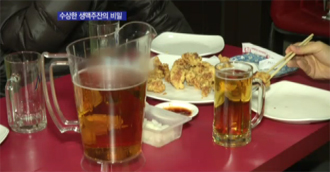 “There was a big discrepancy between all the bars,” the consumer agency said in a release. “We found that some of them were even shorting customers by 460 cc on 3,000 cc pitchers.”

However, the agency said the pubs were not solely at fault as mugs and pitchers that were provided by local brewers like OB and Hite Jinro for free are designed in such a way that they cannot contain as much liquid as they appear to.

The beer makers said that from this year they will change the pitchers to correct the situation and also add capacity meters showing how much beer they currently contain, for example at 100 cc gradations.

Until that happens, “retailers [bars and pubs] should use beer mugs or pitchers with capacity meters and offer revised menus showing exactly how much beer they are getting,” the KCA said in a statement.