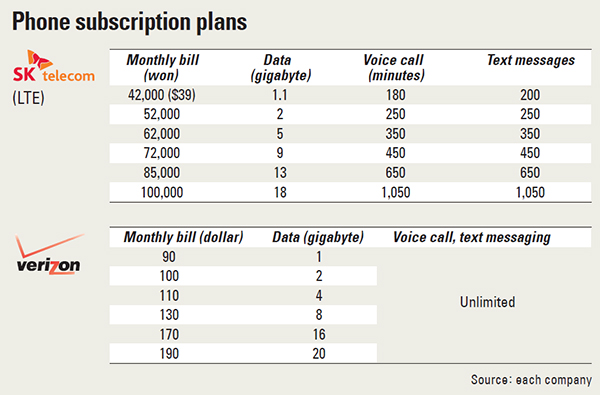 Kim, a 40-year-old office worker, pays SK Telecom 46,000 won ($43.18) every month to use a 5-gigabyte long -term evolution service for his smartphone. He pays a separate bill of 25,000 won for a similar 4G LTE service for his tablet PC, which his young child mostly uses to watch cartoons on.

He recently bought a smart digital camera so he can upload pictures immediately on social networks like Facebook using his Internet connection. The LTE service for the camera costs him a further 25,000 won a month.

This presents Kim with a monthly bill of 91,000 won for up to 10 gigabytes of data. But his financial predicament is about to become slightly easier with the arrival of a new LTE data-sharing service that puts multiple smart devices on a single plan.

SK Telecom was the last among the country’s three telecommunications companies after KT and LG U+ to offer such a plan last week, which offers to shave up to 15,000 won off subscribers’ current bills.

Among the three, LG U+ allows data-sharing among two devices, SK Telecom among five and KT nine.

The data-sharing billing system is a stepping stone in the process of completely changing how telecommunications companies charge for their services. As the way people use their mobile devices changes, the companies are shifting the way they charge customers away from voice calls and over to data use.

In the long run, they will offer voice calls for free while increasing their charges for data as people increasingly use their smart devices to surf the Web, download music and video files, use Skype or Viber for cheap calls and social network services like KakaoTalk for free text messaging.

Moreover, the faster long-term evolution (LTE) networks are starting to take off and there are fears that data traffic could soon clog up unless the system is carefully managed.

Additionally, as part of her campaign pledges to lower telecom bills, President-elected Park Geun-hye proposed promoting mobile voice over Internet protocol (mVoIP), a wireless Internet phone, and only charging smart device users for the exact amount of data they use.

“We’re looking into changing the current billing system, which is based on voice calls and text messaging, over to data usage,” said an employee at SK Telecom. “Much like how Verizon in the U.S. operates, the new billing system will likely be introduced in the first half of this year.”

Since July, Verizon has been offering unlimited use of voice alls and text messages for a monthly fee of $40. Smartphone users can pay an extra $50 to $150 to access between 1 gigabyte and 20 gigabytes of data.

“It will take some time to completely change the billing system to refocus on data usage, akin to the system Verizon uses,” said Ko Chang-kook, who also works at SK Telecom. “However, it will likely be serviced at the end of the first half.”

Carriers say ultimately everyone stands to benefit from the new data-sharing system, the first part of which was introduced on Dec. 24.

“In the long run, I think a billing system where voice calls and text messaging is free and users are charged based on how much they use the data service is the right way to go,” Pyo Hyun-myung, the president of KT’s mobile business division, said at a press conference in November. He added that fully implementing the new system may take some time due to its more complicated nature.

LG U+, which is acting aggressively in moving to adopt the new system, is expected to implement it in the first half of this year.

Until now, local telecommunications companies have bundled voice calls, text messaging and data use into the same bill.

One of SK Telecom’s popular packages, LTE52, offers subscribers 250 minutes of voice calls, 250 text messages and 2 gigabytes of data usage on the LTE network for 52,000 won a month. KT and LG are slightly more generous but offer the same basic structure.

At present, subscribers often find themselves paying for packages that include unlimited data use, meaning that those who like to talk on the phone rather than surf the Web are wasting money each month. The new system would let them choose a plan that better serves their needs.

On the flip side, those who gobble up data are going to face steeper bills.

On a brighter note for consumers, once mVoIP becomes widespread carriers will be forced to lower their fees for voice calls. At present, voice calls account for roughly 70 percent of the carriers’ earnings.

Until then, the most economical option for the majority of users of multiple smart devices would be to sign up for a data-sharing plan.

But there is a catch: All the carriers have a minimum threshold for how much subscribers must spend each month in order to be eligible for the shared plans on the LTE networks. SK Telecom and KT users must pay at least 34,000 won, while LG U+ has set the limit higher at 52,000 won.

Another drawback is that the plans don’t offer discount packages for teenagers, whereas the separate plans do.