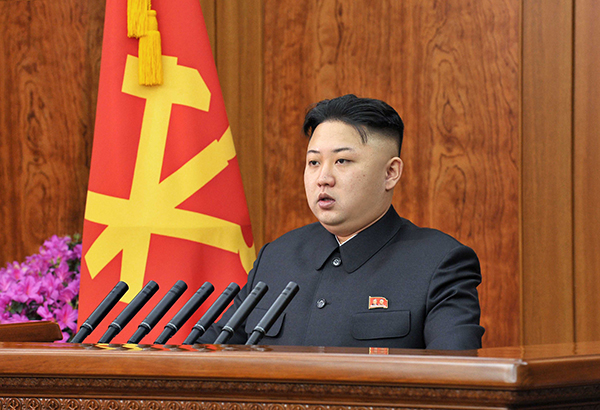 He also refrained from denouncing the newly elected president of the South and didn’t mention the United States.

“Let’s begin the phase of developing into an economic giant with that spirit, that might that conquered space,” Kim said in a televised message broadcast by the North’s official Korean Central Television. “This is the slogan that our party and people should carry out this year.” 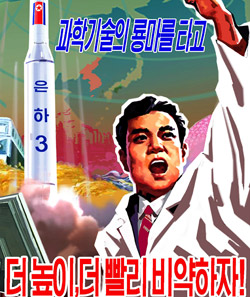 It’s the first New Year’s address in the regime in 19 years since founder Kim Il Sung made one in 1994, the year he died.

The youngest son of late leader Kim Jong-il has mimicked the gestures and fashion style of his grandfather, who frequently made public addresses, differing from his more reclusive father.

Most of the speech placed an emphasis on strengthening the ailing economy, calling it “the most important task in building up a strong, prosperous nation of socialism.”

“We should prompt a decisive turnabout this year in developing into an economic power and improving the livelihoods of people ... with that strength of manufacturing and launching our own working satellite,” Kim said.

“The new year of 2013 is a year of creation and change, when we should open up a decisive turnabout in developing a strong, prosperous nation,” he said. “To bring it about, we should fundamentally improve the work ethic of our workers and our business style.”

Still, Kim emphasized that “agriculture and light industry are still two main front lines for economic development” and he will also “boost livestock, fishery and fruit industries” as well.

“It is notable that he emphasized improving the direction and management of the economy, although he didn’t mention it specifically,” the Ministry of Unification said in an analysis yesterday.

Kim also called for reunification of the two Koreas, saying “respecting inter-Korean joint declarations is the basic premise” for unification.

“The important matter to realize unification and ending the division of the country is easing the confrontation between the North and South,” he said.

“As we can see with the previous relations, the confrontation only leads to war. The anti-unification people in the South should abandon the policy of confrontation and move toward reconciliation, cooperation and unification.”