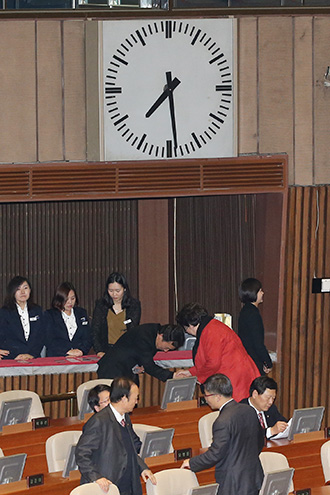 In law, the actual deadline for passing the annual budget is Dec. 2 to allow 30 days of preparation for the bill’s implementation. That deadline has not been met in the past decade, and the practical deadline has been considered Dec. 31.

Following an overnight plenary session in the National Assembly, the bill, 500 billion won lower than the initial government budget proposal, was passed with 222 votes for, 41 against and 30 abstentions at 6 a.m. yesterday.

On Sunday, the parties agreed on a budget of 342.7 trillion won, slightly higher than the government’s initial budget proposal of 342.5 trillion won.

In the final days of negotiations, 700 billion won in spending on pork barrel allocations was shaved from the budget. At the last moment, the two sides were deadlocked on the funding of a controversial naval base on Jeju Island.

President-elect Park Geun-hye and the ruling Saenuri Party are proponents of the base off the southern coast of Korea as a means to boost national defense. The opposition is against it and has demanded severe budget cuts to the project.

The parties came to a compromise yesterday to retain the original government budget for the base of 200.9 billion won but to halt construction for 70 days for further review of the project.

In December, the Seoul High Court backed a previous ruling by the Supreme Court in July that the construction of the naval base on southern Jeju Island is lawful, rejecting complaints filed by residents of Gangjeong Village, the site of the base, that called for a halt to the construction plan.

The idea for the Jeju base, first floated in 1993 by the Kim Young-sam administration, was adopted by the liberal Roh Moo-hyun administration in 2007 and is a pet project of the current conservative administration of Lee Myung-bak.

For the first time, expenditures on welfare and so-called social infrastructure surpassed 30 percent of the year’s budget. That spending is over 103 trillion won, nearly 5 percent higher than the government’s initial budget proposal.

President-elect Park campaigned on pledges to increase welfare, including free day care for toddlers under 5, lower university tuition and higher salaries for soldiers.

Lawmakers decided not to issue additional bonds to cover Park’s welfare pledges, which the opposition was against.

Other increases were seen in budgets for regional projects, especially in areas supported by key Saenuri Party representatives, including 61.5 billion won for the building of a new stadium for the 2014 Asian Games in Incheon, district of party chairman Hwang Woo-yea.

Major cuts were made in the areas of research and development and national defense.

Despite Park’s election promise to make national security a top priority, the defense budget was 34.3 trillion won, 3.8 percent higher than 2012, but 328.7 billion won lower than originally proposed by the government. This included a 130 billion won cut in the budget for a next generation of FX fighter jets, a 30 percent cut from the government proposal of 460 billion won. Expenditures on developing AHX attack helicopters were slashed by 50 billion won.

The budget to expand the K2 Bundang subway line operated by Korail was cut by 56.7 billion won.

Other issues that the parties argued over and passed in separate bills included a bill in which taxis will be legally recognized as public transportation, which will allow them subsidies and tax breaks like other mass transportation such as buses and subways.

Another bill was passed by the National Assembly to limit the operating hours of chaebol-controlled retail outlets, which prevents them from operating between midnight and 10 a.m. and also requires them to close two days a month.