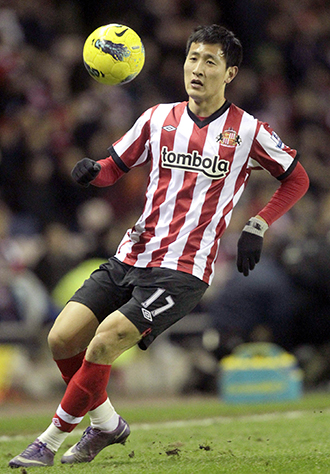 Ji Dong-won’s move to FC Augsburg on loan has excited sports fans as the striker will now pair up with midfielder Koo Ja-cheol, who is also on loan from VfL Wolfsburg.

Premier League club Sunderland announced that it has completed a deal to loan the 21-year-old Korean forward to Augsburg in a statement released early yesterday, Korea Standard Time. Ji will play for the Bundesliga side until the end of the season, Sunderland said.

It is a welcome move for Ji as well, who is desperate for a chance to reverse a growing pessimism around the young player. Koo, a former Olympic teammate, will lend a helping hand in the process.

Ji landed a three-year deal with Sunderland in June 2011 while playing for the K-League’s Chunnam Dragons, with local media raving about him as the eighth Korean Premier Leaguer.

Ji scored 10 goals in 33 K-League games, a promising performance for a rookie, and he appeared to live up to the expectations by scoring his first Premier League goal in just his fourth appearance in a match against Chelsea. The game ended in a 2-1 loss for Sunderland, but Ji once again left a strong impression with his winner against Manchester City on Jan. 1, 2012.

The hype subsided quickly, however, as he spent much more time on the bench rather than on the pitch. Ji made an appearance in 21 games including Cup matches, but started in only two of the games. He failed to increase his goal tally to more than two in the 2011-12 season.

His misery protracted after Sunderland coach Steve Bruce, who brought in Ji, got the axe due to the poor results in November 2011. His replacement Martin O’Neill has not let Ji play a single game during the ongoing 2012-13 season.

“It’s good that the transfer worked out before the start of training,” Stefan Reuter, sporting director of Augsburg, told Augsburg’s official Web site.

“Ji Dong-won can be used in several positions,” Reuter said.

Indeed, Augsburg has a thinner pool of strikers than Sunderland, who combined for only 12 goals in the 17 games held so far in the 2012-13 season.

Sascha Molders, a lone striker, is leading in goals with four, followed by midfielder Tobias Werner, who scored three goals.

Augsburg is frequently adopting a one striker-three midfielder formation, and the expectation is that Ji would be used as a midfielder on the wing. The current right winger Milan Petrzela is struggling to find his form.

Ji’s transfer came as Augsburg is desperate to stay out of the relegation zone.

Augsburg is currently the second-worst team in the Bundesliga.

The two worst teams in the league are bound for the lower division, while the 16th place has to enter a playoff with the winner of the second division for the right to stay in the first division.

The league is currently in its half-season break and will kick off the second half of the season on Jan. 18.