Rookie of the Year Award a possibility for Ryu?

Rookie of the Year Award a possibility for Ryu? 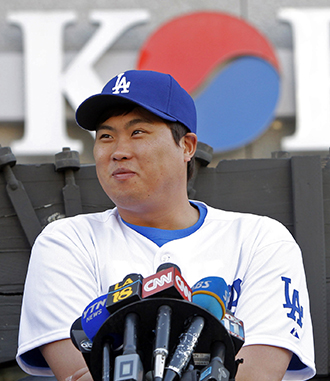 Ryu Hyun-jin speaks at a press conference in Los Angeles last month after he signed a 36 million dollar, six-year deal with the Los Angeles Dodgers. [YONHAP]

Ryu Hyun-jin, who became the first player to move directly from the Korea Baseball Organization to Major League Baseball, is seeking another first - becoming the only Korean to win the Rookie of the Year Award in the big leagues. But how realistic of a goal is this?

Many Asians have come close to the title, including Park Chan-ho, but only three have won it, all of whom were from Japan. Hideo Nomo won it first in 1995 with the Los Angeles Dodgers followed by Kazuhiro Sasaki in 2000 and Ichiro Suzuki in 2001, both with the Seattle Mariners.

Can Ryu become the fourth winner from Asia? Analysts say that he has to overcome high barriers in order to accomplish the feat.

The National League, where Ryu will play as a member of the Los Angeles Dodgers, has named a pitcher the rookie of the year only six times since the 1990s.

Only four of them were starters with two winning as relief pitchers - Craig Kimbrel of the Atlanta Braves in 2011 and Scott Williamson of the Cincinnati Reds in 1999.

Ryu, a former Hanwha Eagles ace who earned 98 wins and 52 losses in his seven KBO seasons, is expected by local observers to be a third or fourth starter for the Dodgers.

The Baseball Writers’ Association of America has had a tendency to pick a hitter for the rookie award rather than a pitcher in a two-way race for the title.

Last year, Bryce Harper of the Washington Nationals batted 0.270, hit 22 homers and recorded 59 RBI, edging Wade Miley of the Arizona Diamondbacks (who had 16 wins and 11 losses with a 3.33 ERA).

There have also been complaints of a bias against foreign players. Daisuke Matsuzaka became the first rookie in 23 years in the Major Leagues to record both 200 innings and 200 strikeouts in 2007, but the Japanese pitcher only finished fourth in the American League vote.

Yu Darvish of Japan also had an impressive debut year, becoming the sixth MLB rookie to record 15 wins and 200 strikeouts, but he finished third. Mike Trout, the Los Angeles Angels outfielder, was the undisputed winner, but some raised the question that Darvish was ranked lower than Oakland A’s outfielder Yoennis Cespedes.

Ryu had a clause put in his contract that enables him to acquire free agency in five years if he pitches 750 innings. That translates to 150 innings each year on average. If Ryu fulfills the opt-out requirements, a rookie of the year honor wouldn’t be too distant of a goal for him to reach.