Abe must learn from Nakasone

Abe must learn from Nakasone 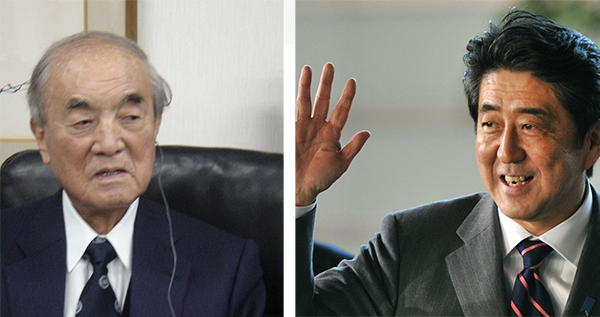 On the very night he took office on Nov. 30, 1982, Japanese Prime Minister Yasuhiro Nakasone called his assistant Ryuzo Sejima to his residence for a special mission. He ordered Sejima to seek ways to improve ties with Korea at a time when Japan’s relations with its key neighbors like Korea and China, as well as its main ally the United States, were at their worst. His predecessor Zenko Suzuki stepped down without resolving disputes over history textbooks and yen-denominated loans. His foreign policy gaffe that also jeopardized traditional ties with the U.S. led to his resignation. His successor, intent to right the wrongs, moved discreetly and fast.

Ryuzo Sejima secretly met with Kwon Ik-hyun, the close confidant of President Chun Doo Hwan and secretary general of the ruling Democratic Justice Party in Busan and Osaka and resolved pending issues between the two countries. He revised down Seoul’s request for $6 billion in loans for security and economic programs and repackaged it as a $4 billion economic cooperation pact. Based on the economic pact with Seoul, Nakasone broke ice with Washington and built a relationship with U.S. President Ronald Reagan popularly called the “Ron-Yasu” friendship.

He was also famously known for paving the way for unprecedentedly close relations with Beijing through a rapport with Hu Yaobang, general secretary of the Communist Party of China. The statesmanship was possible because Nakasone yielded first by including an article to respect neighboring countries in recording school textbooks and providing economic financing.

The right-wing Liberal Democratic Party has regained its ruling power under hawkish leader Shinzo Abe. During his campaign, Abe pledged to replace the war-renouncing constitution to rearm Japan and exercise the right for collective self-defense, or a full-fledged use of force that has been banned since the Second World War. He also vowed stronger assertiveness on territorial disputes and nullification of past government statements on wartime acts such as the 1993 formal apology by then Chief Cabinet Secretary Yohei Kono for the imperial army’s involvement in recruiting Asian women for sexual service to Japanese soldiers and the 1994 statement by Prime Minister Tomiichi Murayama regretting the country’s past colonial and wartime excesses.

If he actually carries out his promises, Abe would be jeopardizing a peaceful relationship among the three Northeast Asia countries. Japan would be tipping over its long-held and hard-won reputation as peacekeeper and instead make itself a potentially dangerous ultra-right and nationalistic nation.

If Japan forgets its past wartime aggressions and rearms itself, it could risk irrecoverable relations with China and Korea. It could raise military tensions in the East Sea and South China Sea by fueling a sovereignty rivalry over a separate chain of islets to a neo-cold war level. He named ultraconservative lawmakers who share his agenda on revising the pacifist constitution and demanded assertiveness on military, territorial and imperial past like Yoshitaka Shindo as internal affairs and communications minister and Tomomi Inada as state minister for administrative and public servant system reforms - two who were among the lawmakers who attempted to visit Dokdo to claim sovereignty over the islets known as Takeshima in Japan - and Hakubun Shimomura as education minister. The right-wing and nationalistic tone of the Abe administration causes alarm in the region.

Abe is advised to learn from veteran statesman Nakasone in his diplomatic skills. He needs to withdraw his plan to replace the pacifist constitution and instead work toward a peaceful path based on an accurate historical view. Once free from its post-war shackles, the Abe administration could even pursue a nuclear weapons program in the process of building up military force. When including the far-right Japan Restoration Party led by maverick nationalists like ex-governor of Tokyo Shintaro Ishihara, who champions nuclear arms, the conservative forces take up 348 seats in the lower Diet, or more than two-thirds that could pass constitutional reform.

Conservative governments have been born on both sides of the Pacific. It provides a good chance of improving Seoul-Tokyo ties. What should the Park Geun-hye government do first? It should mobilize both formal and informal diplomatic channels to prevent the new Abe government from lurching too far right. It should talk Tokyo out of scrapping past apologetic statements and seeking international arbitration in disputes over Dokdo. It also needs to restore political and economic partnership networks such as the currency swap agreement, Korea-Japan-China free trade deal and common energy project. In the long run, it must persuade Japan not to touch its pacifist constitution and risk regional peace and security.


*The author is a professor of international relations at Busan University of Foreign Studies.
By Sohn Ki-sup