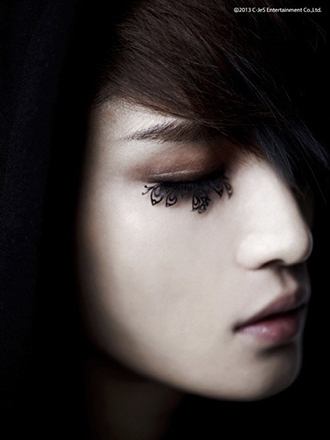 CJeS Entertainment revealed the first round of teasers for Kim Jae-joong’s debut solo album on Jan.2 as promised.

In the pictures the JYJ member can be seen sporting some fake eyelashes that look like intricate tree leaves. There are also shots of props used for Kim’s video, revealing interestingly patterned fabric.

“He wrote all the lyrics contained on the album,” said a spokesperson from CJeS in regards to Kim’s first solo work, which will see the singer try to break away from the idol tag.
Rock band Sinawe’s vocalist Kim Ba-da has taken part in the album to help out Kim.

The album, to be released on Jan. 17, will have a rock ’n’ roll feel, “but we didn’t think that we had to limit ourselves to going for the metal look,” explained the agency on settling for an avant-garde aesthetic theme.