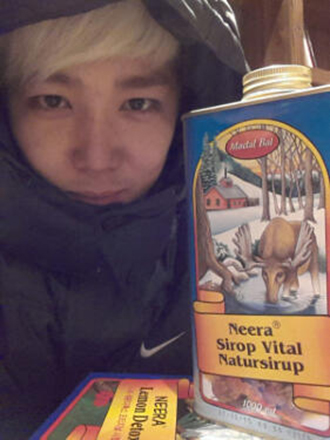 Super Junior’s Kangin dispensed some beauty tips that came in the form of a present from a friend.

On Jan. 1, the Super Junior member, who recently joined the group again after a stint in the Army, said that he’d been on a detox program given to him by a friend.

As a gesture of thanks, he uploaded a picture of himself with the product and said, “because of Hanbyul, after 10 days my skin looks better than before.”

In the picture, the boy band member can be seen dressed in a winter jacket complete with a hood and sporting blond hair.

Meanwhile on the following day, Ryeowook, another member of the group, impressed fans with greetings from Greece.

“First official outing for 2013, let’s enjoy!” tweeted the singer with a mention that fellow band member Kyuhyun had taken the attached shot.