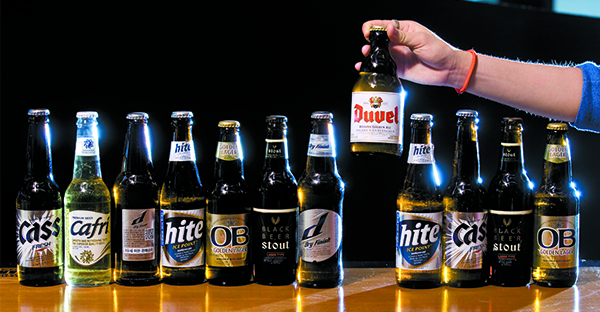 The nation’s beer market has been dominated by the duopoly of Hite-Jinro and Oriental Brewery for decades. Thirsting for something new, Korean consumers have turned to imported beer. By Kwon Hyuk-jae


Brewmaster Yun Jeong-hun was well known locally before he headed to China two years ago. The 43-year-old had served as a judge at international beer competitions, worked in microbreweries overseas and completed a brewing course in the United States before returning to Korea on a quest to transform the domestic beer market.

Yun aimed high. He opened two pubs and began brewing house beer. But it wasn’t long before he was forced to close shop. High taxes and rigid alcohol policies made it impossible to make ends meet, he says.

“It was a desperate decision moving to China to build a beer factory, but I simply couldn’t penetrate the Korean beer market.”

The local scene has been dominated over the past few decades by two breweries - Hite-Jinro and Oriental Brewery. Oriental Brewery, established by the Doosan Group in 1952, is responsible for the OB, Cass and Cafri lagers. Hite-Jinro produces Hite and Max.

The domestic beer market is estimated to be worth around 4 trillion won ($3.76 billion). OB accounts for around 55 percent of local production while Hite-Jinro dominates almost all of the remaining 45 percent. The duopoly has done little to satisfy consumers, and imports are surging as a result.

There is little question as to why Cass, Hite and Max aren’t impressing. They are the reasons behind Korea’s unflattering titles like “The land of the bland,” “Home to the piss of the devil” and “Where beer tastes like cASS.” But what is less certain is why fuller, more assertive brews haven’t taken bites out of the market.

Hite-Jinro and OB say they are capable of producing various types of beer other than their mass lagers, but they stick to their products based on thorough market research.

“We conduct surveys among thousands of consumers every year and a majority of them prefer the American lager style that is light and crisp,” says an official at OB who spoke on the condition of anonymity.

Others dismiss this explanation and place the blame not on consumer preference but on government taxation and regulatory policies.

“Major players are bound to target the preference of the public,” says Cha Bo-yoon, chairman of the Korea Microbrewery Association. “The real problem lies in taxation.” 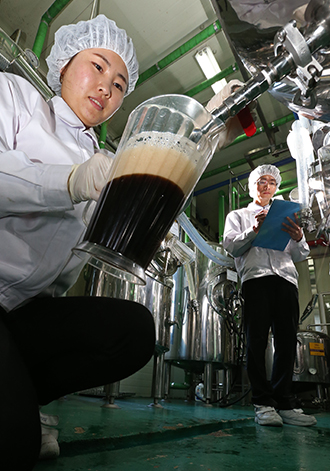 High taxes and strict policies applied to local breweries have strangled the Korean beer market. But the Jeju Special Self-Governing Province Development Corporation plans to launch a beer nonetheless. Its Jespi is made with 100 percent Jeju barley. By Kim Do-hoon

Putting money where the mouth is

There have been signs for some time that Koreans are thirsting for better beer.

The total production of Korean beer by Hite-Jinro and OB has stayed consistent between 2008 and 2011 while total imports have been continuously increased over the same period.

“There is no diversity in the Korean beer market,” says the director of an online beer community surnamed Lee. “About 95 percent of Americans drink Budweiser, Miller or Coors. Many American beer aficionados think of the three major American beers as bland and flat. But nobody would call American beer ‘boring’ because there are about 2,000 microbreweries in the States, and they bring much-needed diversity.”

Under current laws, it is very difficult for local establishments to brew their own beer because of the tax system applied to alcohol production.

But the Korean government calculates taxes based on original costs.

If the original cost of producing one bottle of beer is 1,000 won, a beer manufacturer has to pay 720 won in liquor taxes (72 percent). An additional tax that collects revenue for education is also applied (30 percent of the liquor tax, which in this case is 216 won). Then there’s the 10 percent value-added tax.

“Taxes applied to Korean breweries are 100 times higher than those in Germany,” says Lee Dong-phil, president of the Korea Rural Economic Institute.

The only way for breweries to lower the tax burden is to cut down on the original cost. And as Korean drinkers know too well, cost reduction correlates strongly with a drop in quality.

The taxation system works for major players, but it is a major market barrier. Microbreweries use more quality ingredients such as hops and malt and produce beer in smaller quantities.

Other policies have added to the difficulties. In order to open a brewery, one has to be licensed by the government. Previously, a brewery had to be equipped with 1,850 kiloliters of storage space. The standard was lowered substantially to 100 kiloliters in 2009 by the Fair Trade Commission, the nation’s anti-trust watchdog.

“In order to meet the current standards, one needs at least between 6 billion won and 10 billion won,” says Lee Won-sik, president of Oktoberfest, a chain of pubs in Korea.

Lee runs six beerhouses in Seoul. He wants to open more, but smaller brewers like his are only allowed to sell their beer on their own premises under hygienic regulations.

“The quality of beer is directly linked to the health of the public, and we see small breweries can’t afford to monitor the safety and hygiene of their products,” says Yu Jae-cheol, an official at the consumption tax department of the National Tax Service.

But experts criticize the NTS for its approach. The tax office doesn’t see beer as an alcoholic drink, but rather as a major source of revenue, they say.

“If the NTS thinks the products of small producers are not safe, it sends a message that products of conglomerates are safer and superior,” says Kim Jin-guk, an economics professor at Pai Chai University.

“The government should open up the market and come up with countermeasures whenever a problem arises.” 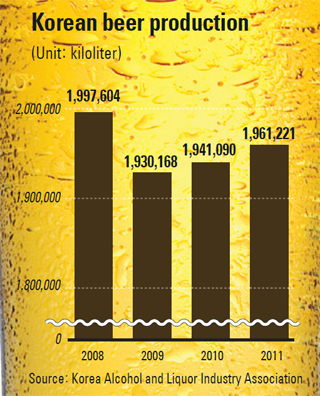 The high cost of low prices

Despite the high taxes imposed on production, local beers are relatively cheap. This is because they are classified as an essential market product. But the low prices don’t come without a cost - breweries are largely unable to control prices, and the market suffers for it.

According to Korea Price Information, the prices of jjajangmyeon (noodles with black bean sauce), seolleongtang (ox bone soup) and bus fares increased by 50 times between 1970 and 2011, but the price of beer increased seven times.

“We have to follow the government’s direction when it comes to prices,” says an official at OB who spoke on the condition of anonymity.

“There is nothing we can decide by ourselves, from product planning to pricing,” says the industry insider. “We often wine and dine with NTS officials to find out solutions.”

The NTS even purchased barley used in beer and sold it to manufacturers until 2006, he said.

“Beer prices are hugely influenced by grain, oil and packaging prices,” says someone who used to work for OB.

Whenever prices of such commodities surge, however, breweries often say they freeze beer prices for the sake of the public. But the former OB official says it didn’t come without a cost: “that meant they would lower original costs.”

NTS has serious clout not just over breweries, but over entire liquor market. Retired officials of the taxation service garner privileges and work as high-ranking employees at many liquor companies.

For instance, three former NTS officials work at the Korea Ethanol Supplies Company, which monopolizes the circulation of refined spirits. The manufacturing of the beverage caps is also under the influence of the NTS. 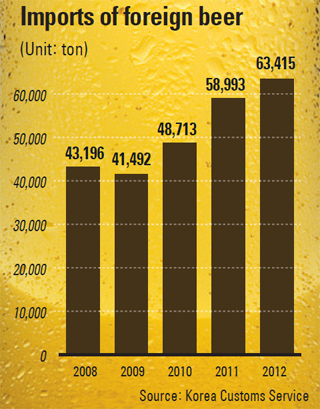 Not so hoppy beginnings

While Yun was unable to survive in the highly taxed market, others are pushing to meet the evolving demands of Korean drinkers.

Made 100 percent with barley grown on Jeju Island, JPDC plans to launch the beer in June throughout the island.

“We didn’t extract that much alcohol while brewing to give it a full-bodied taste,” says Gang Gyeong-gu, a team head at the beer development team at JPDC.

The initial plan was to distribute the Jeju beer across the nation, but the plan didn’t work because JPDC failed to attract a private business operator.

Nobody was willing to invest in the Jeju beer project because a company had to invest 45 billion won over eight years. JPDC asked the NTS to lower taxes temporarily, but the offer was turned down.

Another small-sized brewery, 7Brau, has also struggled, but it recently had a breakthrough.

Its India Pale Ale found a place on market shelves of Homeplus late last month, two years after its launch.

Although 7Brau produces three types of beer in total including India Pale Ale, Stout and Pilsner, it is indeed a feat for a brewery that has been struggling for years to secure distribution channels.

“We plan to produce four more types of beer by the end of this year,” says Kim Gang-sam, the president of the company. “I want to appeal to consumers not with volume but with our own character and style.”