LG gets there first by rolling out 55-inch OLED TV

LG gets there first by rolling out 55-inch OLED TV 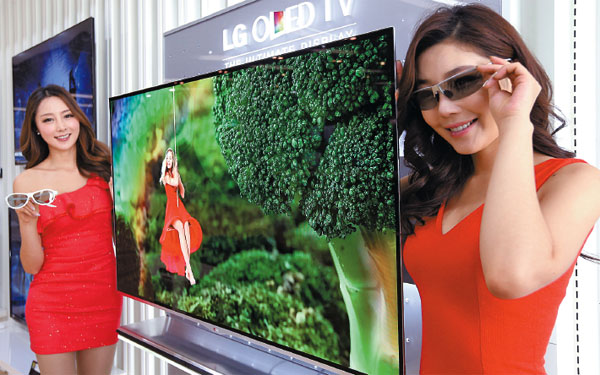 Model’s pose next to the world’s first 55-inch OLED TV at LG Electronics’ store in Gangnam, southern Seoul, yesterday. The OLED TV, which is available now for pre-order only, retails for 11 million won (10,348 dollar). Deliveries will be made starting early next month.Provided by the company


LG Electronics has become the first company in the world to launch commercial sales of a 55-inch OLED TV, giving it an advantage over its archrival Samsung Electronics. According to the company, it is just 4 millimeters (0.16 inches) thick and weighs around 10 kilograms (22 pounds).

The two companies have been competing to gain an early upper hand for such a large-size model in the next-generation TV market.

LG Electronics said it is selling a total of 1,400 of the TVs at 32 major retailers, including department stores, across the country. It started accepting pre-bookings yesterday and will delivery them early next month. The TVs are retailing for 11 million won ($10,340), as projected by market experts.

LG will launch the model in North America, Europe and other Asian countries in the first quarter as it bids to secure a lead in the next-generation HDTV market.

Sony was the first TV manufacturer to successfully develop an 11-inch OLED TV, but it failed to translate this into commercial sales due to technological problems and problems with its economies of scale.

Upon learning that it had been upstaged by LG, Samsung Electronics appeared unfazed. Yoon Boo-keun, Samsung’s president of consumer electronics, told reporters at Shilla Hotel in central Seoul he was confidant consumers would notice improvements in similar models developed by Samsung Electronics.

Samsung has also successfully developed a large OLED TV, but it is not yet ready to roll the models out on a commercial scale. It displayed its 55-inch model at a high-profile trade show last year. However, it still faces a challenge in terms raising the manufacturing yield to a level that makes for acceptable profits by reducing the number of faulty panels that roll off the production line.

The race to develop high-tech TVs started in the last couple of years as the LCD TV market is now saturated and demand is expected to fall, leading manufacturers to seek out new TVs to boost revenue.

They both announced plans to unveil 55-inch OLED TVs in May, just months before the London Olympics.