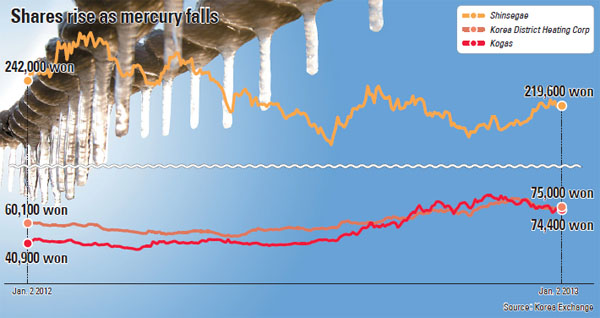 The unusually cold winter weather has caused shares of utility companies and retailers to soar on the local bourse.

State-run Korea Gas Corporation (Kogas) closed at 74,400 won ($69.9) yesterday, up from 40,900 won a year earlier. The unusually bitter cold and the shortage of power supply is driving power companies to improve their energy production and development.

The mercury is expected to hit at least minus 10 degrees Celsius (14 Fahrenheit) until Monday.

“Power companies’ profitability should improve, especially as power supply shifts from nuclear to other heating energy sources,” said an analyst at a local brokerage.

In the case of Kogas, market observers say its recent forays into overseas resource development also played a role in its inflated stock price.

In December, it clinched a deal with the government of Mozambique to construct pipelines and an operating facility to supply natural gas to the city of Maputo. It is scheduled to supply natural gas to the region from February 2014. Earlier in October, it signed a contract with Iraq’s Oil Pipelines Company to construct pipelines linking the country’s northern regions of Kirkuk and Baiji.

Korea District Heating Corporation has also seen its fortunes rise, with the corporation finally turning a profit in the third quarter. It closed at 75,000 won yesterday, up 24.7 percent from 60,100 won a year earlier.

“The heating industry is now in its peak season, and a 5.4 percent hike in heating fees that took effect in December added to positive industry sentiment,” Hana Daetoo Securities said in a report. “The company’s performance is likely to improve as it began running a 141-megawatt cogeneration plant in November.”

Meanwhile, Korea Electric Power Corporation (Kepco) posted 1.97 trillion won in operating profit from June to September, up 39 percent from the same period in 2011.

“Shares of electricity and gas-related companies continue to rise thanks to government’s eased stance on regulating utility fees by raising the price of electricity,” said Yoo Deok-sang, an analyst at Dongbu Securities. “Electricity and gas are indispensable consumer goods, especially over the winter months, and shares of these companies continue to rise backed by investors who see them as a safe bet as the cold snap continues.”

The severe cold spell has also proved lucrative for department stores and other retailers as the sub-zero temperatures force people to loosen their purse-strings and shell out on coats, jackets and heating units.

According to the Ministry of Knowledge Economy, consumers spent an average of 76,900 won every time they shopped at department stores from March to October, but this rose to 90,000 won in November and 92,000 won last month.

Stock prices of Lotte Shopping and Shinsegae, the nation’s top two retailers, climbed 7 percent in December from the previous month, while No. 3 Hyundai Department Store jumped 18 percent. Shinsegae posted 22.2 billion won in operating profit in November alone, up 34.7 percent on-year as it held an extended sale.

“The cold weather has boosted apparel sales, and this has helped department stores recover from their slump,” said Lee Sang-gu, an analyst at Hyundai Securities.

GS Home Shopping is also seeing a turn up for the book as people order everything from kimchi to lingerie by phone. The company closed at 152,900 won yesterday, up from 110,200 won on Jan. 2 last year.

Meanwhile, companies linked to Korea’s smart grid have been drawing attention from investors as fears of supply shortages leading to blackouts make this a more attractive proposal. A smart grid is a digitally enhanced electric grid that gathers, distributes and acts on information about both electricity providers and consumers in order to improve the efficiency of electricity services. “Under the government’s smart grid road map, it will invest 1.47 trillion won by 2020 to switch over from current devices to smart meters,” said Jeon Yong-gi, an analyst at Hyundai Securities. “Patent-holding LS Industrial Systems is likely to benefit.”