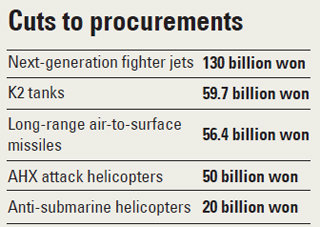 Top officials in the Lee Myung-bak administration criticized yesterday the legislature for slashing the proposed defense budget and diverting money to other projects.

Minister of National Defense Kim Kwan-jin yesterday said it was a shame that money earmarked for national security was treated as a low priority.

“The cuts will bring about a loss or slowdown in improving our capabilities in a few years,” Kim said in a meeting with reporters. “This will be a serious problem, so we must manage defense programs well for the time being to ready our capabilities at appropriate times.”

Kim spoke bitterly about the legislature cutting his proposal for a defense budget to spend more on welfare.

“It is undesirable to slash the defense budget and divert the money to other projects,” he said.

Despite President-elect Park Geun-hye’s promise to make national security a top priority, the defense budget was trimmed when the National Assembly approved the 2013 budget Tuesday. The ruling and opposition parties approved a defense budget of 34.3 trillion won ($32.2 billion), 3.8 percent higher than 2012 but 328.7 billion won lower than originally requested by the government.

The cuts were largely made from procurement projects. A 130 billion won cut was made on a project to buy next-generation fighter jets, 30 percent lower than the government’s proposal, jeopardizing the scheduled purchase by 2017.

While the legislature allocated an additional 111.1 billion won for defense operating and maintenance costs - which includes raising soldiers’ salaries, one of Park’s campaign promises - money earmarked for improving defense capabilities, including procurement, was slashed by 400.9 billion won.

The 10.1 trillion won budget for capabilities improvement amounts to 29.5 percent of the total defense budget, falling below the 30 percent mark for the first time since 2008.

Capabilities improvement is necessary, the government and analysts said, to compensate for a troop reduction. By 2022, the military is scheduled to cut its 636,000 soldiers to 522,000.

“While the welfare budget was increased, lawmakers competed to cut the national security budget,” he said. “It is worrisome that we failed to make proper investments by treating our security threats lightly.”

Top officials, including Defense Minister Kim and security experts, have predicted that North Korea will stage more provocations this year, including missile and nuclear weapons tests.

“It costs about 500 billion won to develop a system to destroy more than 90 percent of the North’s long-range artillery systems,” the senior Blue House official said. “With another 500 billion won, we could also have mid-air interception systems to protect all key targets in Seoul.”

Nicknamed the “Lightening Project,” the plan to develop a next-generation tactical ground-to-ground missile system first began with a special presidential order after North Korea shelled Yeonpyeong Island in November 2010, killing two soldiers and two civilians in the first shelling of territory since the Korean War.

“We won’t be worrying about the North’s long-range artillery if we are using the earmarked money to subsidize the taxi industry,” he continued. A controversial bill to designate taxis as public transportation, qualifying them for subsidies, was also passed Tuesday.

“I wonder if spending money on taxis is more urgent than stopping the North’s long-range artillery,” he said. He criticized politicians’ pledges to cut mandatory military service to 18 months without any plan to compensate for the lost man hours. During the presidential campaign, major candidates, including President-elect Park, promised to shorten the service period.

Meanwhile, a senior government official recalled that there were serious talks with North Korea about a summit before the sinking of the warship Cheonan in March 2010.

“We met with the North many times to hold a summit, but the conditions were not met,” he said. “We could not accept the North’s demands.”

Yim Tae-hee, former Blue House chief of staff, has said he had a secret meeting with representatives from the North in Singapore in October 2009 to arrange an inter-Korean summit.

“We believed that the North’s demands didn’t reflect a true improvement of the inter-Korean relationship,” the source said. “We believe the North’s torpedoing of the Cheonan and shelling of Yeonpyeong Island were Pyongyang’s way of resisting our decision to decline its demands.”