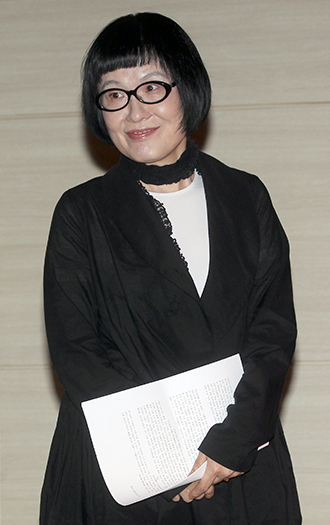 Korean poetry is not always an easy home for an iconoclast, and Kim Hye-soon has always been an iconoclast. Kim was among the first, if not the first, of avowedly and aggressively feminist Korean poets. While Korean modern fiction has had its share of protofeminist and feminist authors including Choe Yun and Park Wan-suh, who pursued feminist interests, modern poetry has been less open.

Overcoming quite a bit of initial critical resistance, Kim has changed all that.

Born in 1955 in Uljin, North Gyeongsang, Kim received her doctorate in Korean literature from Konkuk University. Her first fame as a poet came in 1979 with the publication of five poems, including “Poet Smoking a Cigarette,” in the Journal of Literature and Intellect. Kim, however, did not receive general critical acclaim until the late 1990s with the emergence of a new wave of female poets who had begun to follow her example. 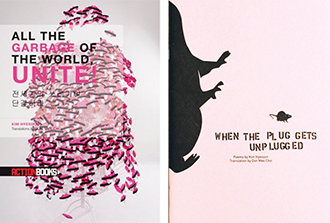 Choi notes Kim’s increasing popularity in all sectors of the English-speaking world.

“Kim Hyesoon has a growing fan base in the U.S. thanks to her publisher [Action Books] and editors, Joyelle McSweeney and Johannes Goransson, who have tirelessly promoted Kim’s poetry,” she said. Kim’s translated books are being taught in MFA poetry, creative writing, and Asian and Korean literature classes, and read by poets, scholars and critics.

Kim’s most recent book “All the Garbage of the World, Unite!” has been reviewed internationally, including in the popular Huffington Post, Quarterly Conversation and Overland, Australia’s leading literary journal.

This success didn’t come easily, for as Kim has noted, she wrote in an environment in which female poets were easily ignored and marginalized. Male poets are known simply as poets, while female writers are called “female poets,” she notes. Further, female poets are divided into subcategories, including young, unmarried and even old.

Kim argues that this differential application of gendered terms to female poets demeans them and decreases the impact of their work. Discussing the effect of this on poetry by Korean women, Kim says, “The evidence of a language system that treats women as ‘the other’ is everywhere, even in literary works. .?.?. The sensation that blooms in those poems, of course, is very masculine and traditional. In Korean poems, nature and women have been judged in that way.”

In her works, Kim demonstrates an unusual facility at combining experimental language with poetic and sometimes jarring images. Her images and language are often violent, which mesh stylistically with her topics that often center around injustice and death. Kim’s style is visceral, with the color red often emerging in descriptions of blood. An example of this kind of symbolism can be found in her poem “Red Scissors Woman,” from the collection “All The Garbage in the World, Unite!”:

The sky, the wound that opens every morning

when a red head is cut out

between the fat red legs of the cloud

(Does that blood live inside me?)

(Do I live inside that blood?)

Because of this approach, and Kim’s sometimes controversial topics, some critics have dubbed her a poet of the grotesque, a judgment at which Kim bristles, considering the label a bit lazy.

“It seems critics call it ‘grotesque’ or ‘surreal’ when faced with writings or attitudes they can’t readily understand. These labels are only words they attached for their own convenience,” she says.

Worse, Kim feels that this kind of labeling is a nostalgic one, a way to look back, toward the past.

“[Critics] always try to find something from the past. Poetry is not a genre in which one writes what is expressible,” she says. This has implications on what she writes, and her stated goal “is to write what is inexpressible. I am challenging the impossibility. I once dubbed my writing process as ‘fractal’ and ‘Mandala.’?”

Instead, Kim emphasizes the fact that her poetry, while it does use language and is often constrained by the nature of the language in which it is written, is also a literature of the senses.

“I make what exists in reality into a ghostly existence by employing oxymoronic approaches or through metaphorical speech on metonymic existence. I turn what people have come to believe undoubtedly exists into a place of insecurity, destruction and mystery,” Kim says.

Her desire is not to portray the obvious or well known. “I turn a familiar space into a strange place, like that of a haunted house. Such a style of poetry writing has more to do with ‘senses’ applied to the poem, rather than the theme,” says Kim. “When entering into such a poem, one doesn’t understand where to find the theme. Climbing up and down the stair of senses, obvious logic and steadfast realism, including feminism, are understood as nothing [more than a speck], perhaps like the Earth in a limitless void.”

Kim notes that even today she finds ample reason to imbue her poetry with feminism and how it affects her approach to language and poetry.

“A patriarchal society is a class-based society. In it, women are of low class in exchange value,” Kim explains. “A male community does not desire improvement in the status of women. Instead, the community tries to deny, govern or protect women. As a woman, I must first rupture the existing senses of language if I want to speak in poetry.”

Kim’s poetry collections in the Korean language include: “From Another Star” (1981), “Father’s Scarecrow” (1984), “The Hell of a Certain Star” (1987) and “Our Negative Picture” (1991). Kim’s work in English includes: “Mommy Must be a Fountain of Feathers,” “When the Plug Gets Unplugged,” “All the Garbage of the World, Unite!” and a collection of essays titled “Princess Abandoned.”