Korean fans gobbling up anything related to ‘Les Miserables’

Korean fans gobbling up anything related to ‘Les Miserables’ 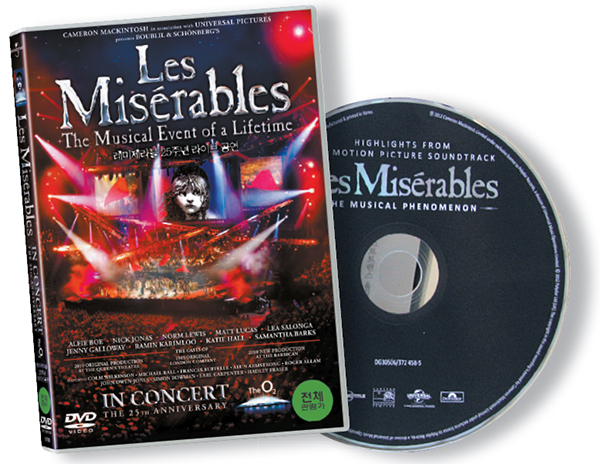 The DVD of “Les Miserables” 25th anniversary concert and other items related to the movie have been flying off the virtual shelves of online shops. Provided by YES24


The strong ticket sales of Hollywood musical blockbuster “Les Miserables” at the Korean box office gave a boost to sales of products related to the musical, including books, CDs and DVDs with more than three million tickets sold in Korea within 13 days of its release.

Online shopping mall YES24 said Wednesday that the star-studded film is dominating CD, DVD and book categories with its original soundtrack album at the top of the site’s music chart and the original music from the musical at fifth. The online Web site has sold 3,030 pieces of the movie’s soundtrack and 350 copies of the music from the musical within 15 days of the domestic opening of the movie, a marked increase from the previous sales of 90 and 40, respectively, during the same period before the release.

In particular, the film’s soundtrack secured the top spot only five days after the film’s release, while the music from the musical is also well received, with the heart-pounding song “Do You Hear the People Sing?”

Along with the music, the Blu-ray of the classic’s 25th anniversary concert ranked fourth on the video chart and the DVD was at sixth.

A five-volume package of the French historical novel by Victor Hugo, published by Minumsa and translated into Korean, ranked 37th on the best-selling chart and 14th in the literary section, something unprecedented for a package book set, according to the online shop. The electronic version of the book reached No. 4.

“The popularity of ‘Les Miserables’ coincides with the increasing interest in classic novels, triggered by the expiration of a copyright held by Ernest Hemingway in 2011. After the expiration, a series of Hemingway’s novels were published and all of them were well received,” said Kim Mi-sun, a representative for the literary book section of YES24.

“Other major publishing companies such as Munhakdongne and Changbi recently released a series of classical novels.”

The ticket sales of the Hollywood spectacular claimed the top spot as well.

“Those who bought the ticket tend to purchase the items related to ‘Les Miserables,’?” said Lee Hee-seung, head of the movie department of the online Web site.