Legendary publisher writes a biography of his own

Legendary publisher writes a biography of his own 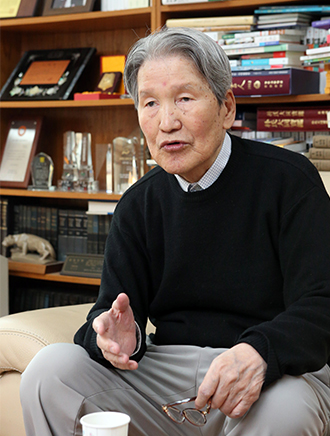 
People today talk about print books becoming artifacts of the past. But Park Maeng-ho, one of Korea’s publishing tycoons, strongly disagrees with the notion.

Some may argue that he’s in denial. After all, Park is the president of Minumsa Publishing Group and has been working in the book industry for the past 47 years.

But the 79-year-old has two very strong points that even those very critical of the future of the industry can hardly refute.

First, people have been talking about the extinction of books for a long time - when televisions emerged, when computers became household items and when smartphones started being stuffed in our pockets. But the book industry survived.

Second, knowledge gathered from books tends to stay in people’s heads longer compared to information absorbed from televisions or IT devices. Those who read books have a higher chance of winning in today’s “information war.”

One more factor that adds credibility to Park’s prediction is that Minumsa and he have always been a step quicker than the rivals. The group published a book on yoga in 1967; its “Today’s Poets” and “Today’s Novelists” series came out in the 1970s, when poems and novels were underappreciated; and “Complete Works of World Literature” hit shelves in 1998, a first in Korea. 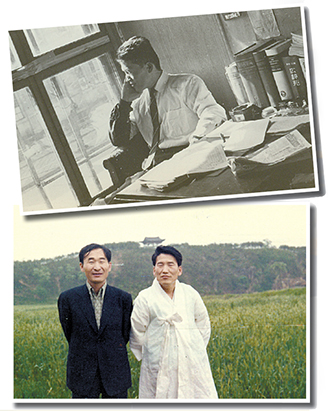 Park Maeng-ho reflected on his 47-year publishing career in his autobiography (below). He started Minumsa in a tiny office (top) in Cheongjin-dong, central Seoul, and helped influential writers and poet Ko Un (left in photo above). [JoongAng Ilbo]

More recently, the publisher has led in modern translations, being the first to produce Korean versions of “Steve Jobs” by Walter Isaacson and “Les Miserables” by Victor Hugo.

And perhaps his final argument is the most convincing:

“It’s just in human’s DNA - reading books is what we do,” Park said in a recent interview with the Korea JoongAng Daily. “Civilizations have read for thousands of years. Humans won’t just abandon that overnight.”

Park, whose career in itself pretty much wraps up the history of Korea’s publishing industry, has recently released his first autobiography, which is simply and appropriately titled, “Book.”

Park, who once dreamed of becoming a writer himself, wrote, “I am made by books, and books became my reason for being.”

The publisher talked about his life journey his office in Sinsa-dong, southern Seoul, which was decorated with a large folding screen carrying jeokbyeokga (one of the five surviving tales told in pansori, or Korean narrative storytelling, that talks of the Battle of Red Cliffs) and a white porcelain carrying a poem by Ko Un, a Korean poet mentioned as one of the front-runners for the Nobel Prize in Literature. 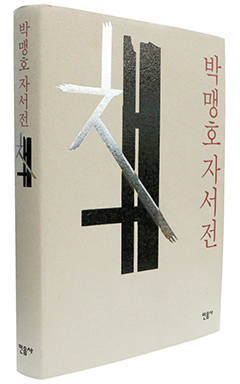 Minumsa opened in a tiny office in 1966 under Korea’s military government. The word “minum” means “carrying the honest voice of the people.” Minumsa has published over 5,000 books so far and is today a “factory of intellect,” printing out one book a day on average.


Q. What prompted you to write an autobiography? What are some of the most memorable events of your life?

A. I felt that now it’s about time that the road I have explored and pioneered is shared and that I advise in detail the younger generation in the publishing industry.

It’s interesting to see how others still abide by the standards Minumsa has set. The “Today’s Poets” series that we first published in 1974 was the first paperbound book in Korea and the first book to adopt horizontal text. Back then, it was considered quite a bold, shocking move. But even today, that format is the standard in the industry.

Looking back, I could tell then that what Minumsa was doing was epic.

I had been interested in literature since I was a boy. So I had a desperate thirst for a sophisticated book published by us [Koreans]. There weren’t many single books either. Many of them were a part of a series. Also, people only sold popular novels, not serious novels, because only the former sold. My goal was to make a well-made single book with accurate content one by one.

In that sense, it was such a gamble to introduce a “Writer of the Year Award”: The deal we offered was if you win, we will publish your novel, pay you royalties, design the book and promote it. It was quite an unprecedented, revolutionary idea given that young novelists back then had no way of publishing a book. Publishers thought they wouldn’t sell and just didn’t take a chance.

The “Today’s Poets” series was similar. Back then Koreans just didn’t know the taste of Korean poems. They just read a few Japanese poetry. So Korean poems were unexplored territory. Through the publication, we ushered in an era of poems in Korea and contributed to the popularization of poetry.

Minumsa was always ahead of the game in the publishing world. From left, a book on yoga (1967); the novel that won Han Soo-san the first Writer of the Year Award in 1977; “Son of Man” by Yi Mun-yol in 1979, the product of an unprecedented award program; the “Complete Works of World Literature” from 1998; a special package of world literature; and “Steve Jobs” by Walter Isaacson. [JoongAng Ilbo]

Your daughter and son are running the subsidiaries of Minumsa Publishing Group, and you mentioned in another interview how you are pleased to see them learn the joy of publishing. Can you describe what this feeling is like? You also originally wanted to be a writer yourself, but decided to discover new talent instead. What satisfaction do you get from discovering new writers?

In the business of publishing books, you don’t ask the customers if they will buy the ones you’re working on in advance. You just believe in them and force your way ahead.

When the books you publish turn out to be a success, the delight you feel is just indescribable. But of course, when you fail, the despair, the blow and the misfortune, they are also equally indescribable.

I would say it’s half and half in terms of success and failure, on average. And even for a veteran publisher, 20 to 30 percent of the books are not successful.

There is a saying in the Korean publishing industry that it’s been in a crisis ever since Dangun [who is said to have founded Korea in 2,333 BC] So it’s not an easy job. Those who don’t enjoy the challenge may not enjoy the business at all.

One such instance at Minumsa is “The Unbearable Lightness of Being” by Milan Kundera. Many at our company said “no” to translating and publishing the book as Kundera was an unfamiliar author to Koreans then, but one student I know read it and said it would work. I gave it a go.

Minumsa is also quite active in the e-book industry and in particular the e-book version of the “Complete Works of World Literature” is doing quite well. Nonetheless, would you say paperbound books are here to stay? What is it that paper books have that e-books don’t?

When Minumsa started in the 1960s, black-and-white TVs were introduced. Then in the ’70s, color TVs came about. In the ’80s, computers came into the scene, and since then, the Internet, smartphones and tablet PCs. Every time, there was a threat of some kind and people said books would become extinct. But it didn’t happen, did it?

In fact, the market continued to grow. When Minumsa first started, we called a book a best seller if it sold over 15,000 copies. But today, a book is a best seller if it sells over one million copies. So you can tell the size of the market has increased. A book that works simply works, no matter what crisis the publishing industry is dealing with.

I think paper books will be around forever. Today’s information is constantly moving. What’s on paper is stalled, stationary, accurate and exact. In the information war, who do you think will win, the one who just came across fleeting information on the Internet, or the one who obtained accurate information on a carefully and strategically planned and published book?