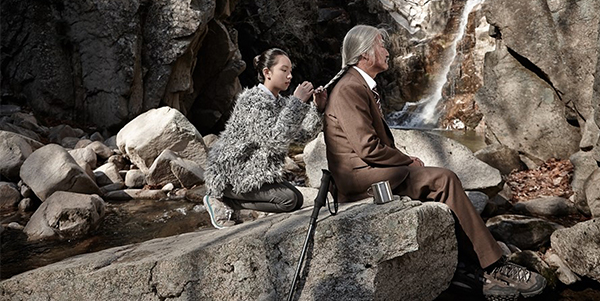 Park Chan-wook and Park Chan-kyung’s short film “Day Trip” tells the story of a pansori master and his student. Provided by Moho Films


While the “Les Miserables” soundtrack is grabbing international attention, a Korean project has stolen headlines with a different kind of traditional performance: pansori. 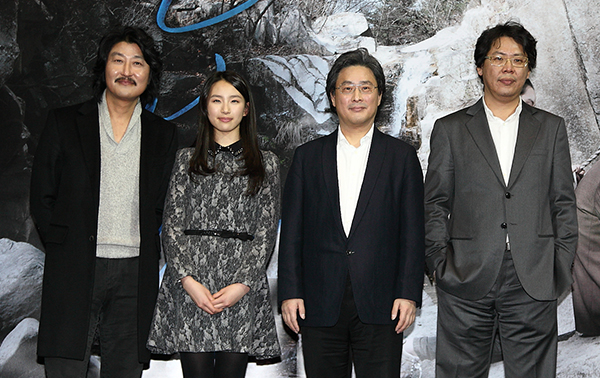 
Co-directors Park Chan-wook of “Oldboy” and his brother Park Chan-kyung place folk narrative singing at the centerpiece of their latest short “Day Trip,” which features a pansori master (Song Kang-ho) and his student (Jeon Hyo-jeong).

The 18-minute short tells the story of their visit to a mountain to practice pansori following a music competition that left the trainee disappointed.

The work is the third short film by the duo dubbed “PARKing CHANce.” Their previous production “Night Fishing,” shot entirely with an iPhone 4, won Best Short Film at the Berlin International Film Festival in 2011.

“Day Trip,” which was released last Friday through outdoor clothing brand Kolon Sport’s official Web site (www.kolonsport.com/40th), is funded by the company to mark its 40th anniversary. But the short has almost no promotional elements.

“We took on the project because the brand gave us autonomy in directing the short,” said Park Chan-kyung, who is better known for his installation and media artworks. “Rather than rendering typical outdoor images, we focus on presenting pansori in harmony with the surrounding nature and civilization.

“We shot most of the scenes at Mount Namsan in Gyeongju [North Gyeongsang]. I think the beautiful scenery is a perfect backdrop for the central pansori performances. The movie is short, but it will remain alive in people’s hearts for a long time.”

The vast majority of the scenes consist of performances of folk music. To those unfamiliar with the genre, pansori might come across as harsh, but it harbors a range of emotions including han, repressed bitterness and powerlessness that many say lingers in the Korean people.

“Day Trip,” however, highlights the traditional music’s harmonious nature with the surrounding scenery by featuring a version of “Sae Taryeong” (“Song of Birds”).

Their trip to the mountain appears to be part of a 100-day practice session required for pansori singers in which they train their voices in the unique acoustic setting of the waterfalls, cliffs and caves. They sing so loudly their voices usually go hoarse and their bodies swell until they feel blood in their throats.

Today, this kind of training may be seen as a way to permanently injure vocal cords, but they pushed themselves in isolation for 100 days believing that the efforts would ultimately makes one’s voice suitable for pansori.

The theory is certainly believable in the film as actress Jeon majestically plays the pansori student.

“I was impressed by Hyo-jeong’s ability to perform and concentrate on expressions, though I already knew she actually learned the traditional music at her school as a pansori major,” said Song, who played the veteran folk music singer.

The short is the debut film for the 15-year-old actress who is attending the National Middle School of Traditional Arts and was selected for the role through a competitive audition.

But Song said he found it difficult to play the master as the actor had to undergo intense make-up sessions prior to each shoot in order to play a man much older than himself.

He wears a specially designed wig of long gray hair. Make-up artist Song Jong-hee who was in charge of turning actor Park Hae-il into a septuagenarian poet in last year’s drama “Eungyo” worked on this movie as well.

The Park brothers said they enjoy working together, as they can share the burden if their project doesn’t succeed.

“If the movie is not well made, we can push off responsibility onto one another. There was no downside to co-directing.”

Park Chan-wook has a project of his own readying for release: “Stoker,” which was shot abroad.

“Shooting a movie in the United States was a novelty and a stimulating experience. But it was also a very awkward one, having to work with a new system and language,” Park said.

“I was struck by how fast the production moved in Hollywood; there was a lot of shooting to be done every day, and I was a little sad that I didn’t have enough time to discuss things more with the actors,” he said about collaborating with Hollywood stars Nicole Kidman, Mia Wasikowska and Matthew Goode on the set in Tennessee.

“Stoker,” about a mother and daughter’s encounter with a mysterious uncle figure, is due to open in theaters in the United States on March 1.