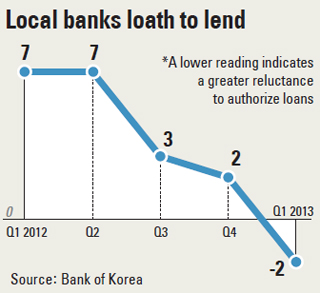 Korean banks are likely to tighten their grip on loans in the first quarter of this year as borrowers’ credit risks are expected to spike amid the economic slowdown, the central bank said yesterday.

An index gauging lending attitudes came in at minus 2 for the January-March period, compared with an index of 2 recorded in the fourth quarter of last year, according to a survey of 16 local banks conducted by the Bank of Korea.

The first-quarter data marked the lowest level since the index came in at minus 4 in the fourth quarter of 2009, it added.

The lower the reading, the more likely banks will tighten their restrictions on lending. A reading below zero means that the number of lenders that will restrict lending surpasses that of banks planning to ease lending criteria.

The indexes measuring lending attitudes toward smaller firms and large companies moved into negative territory for the current quarter, the central bank said.

The data came as heads of Korea’s four major banking groups said in their New Year messages that they will make efforts to strengthen risk management in 2013 in the face of tough economic conditions at home and abroad.

The BOK said that local banks see that borrowers’ credit risks, or the likelihood of borrowers being unable to repay debt, are expected to stay higher than in the first quarter.

An index measuring households’ credit risks came in at 34 in the cited period, up from 31 tallied for the fourth quarter of last year.

The figure marked the highest level since the index hit 44 in the third quarter of 2003 when the credit card bubble burst in Korea.