Fakes may have doomed nuclear exports

Fakes may have doomed nuclear exports 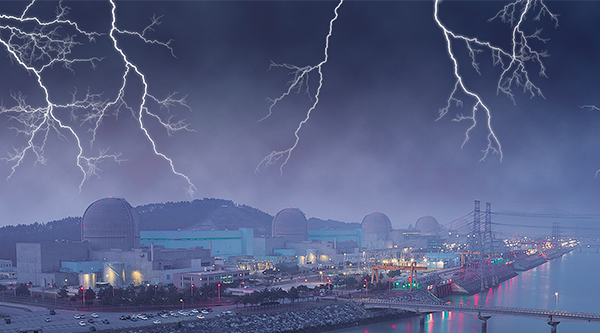 The government decided to allow two reactors at Yeonggwang power plant in North Jeolla to resume operations this week in a bid to shore up as much electricity supply as possible amid the threat of possible nationwide blackouts over the cold winter months.

But the move has sparked safety concerns as the reactors were shut down earlier when thousands of their parts were found to have been supplied using fabricated safety certificates.

Reactor No. 5, which was closed in November, was fired back up on Monday, the last day of 2012, with No. 6 allowed to start generating power again two days later.

The government was desperate to get them back into action as power crunches have been predicted for mid-January due to the unusually cold weather. The temperature was forecast to drop as low as minus 23 degrees Celsius (minus 9.4 Fahrenheit) last night in Seoul with the wind chill factored in.

Last month, the government ate into its electricity reserve several times, prompting it to schedule emergency drills from next week during which households will be expected to unplug all their appliances for short bursts.

However, despite arguments about whether leaning more on nuclear power is a progressive move, critics have voiced concern about possible lax oversight concerning the restarted reactors that allowed so many parts to be installed without the proper paperwork.

“We approved the resumption of operations at the reactors because all the parts with fake certificates have been replaced, and the overall facilities were found to be functioning safely,” said the Nuclear Safety and Security Commission, the nation’s nuclear power supervisory.

Similar problems have been detected in relation to parts supplied to reactors at the Gori plant, South Gyeongsang, and Uljin in North Gyeongsang.

Moreover, the loss of credibility concerning the nation’s power facilities could have international implications for Korea, which exported its nuclear power plants to the United Arab Emirates in 2009 and has been competing to win more contracts overseas in the last few years.

The team investigating the controversial parts in conjunction with the Nuclear Safety and Security Commission said a whopping 13,794 parts (561 types) with fake quality warranties were found to have been supplied to the Korea Hydro and Nuclear Power Corporation (KHNP) over the past decade. Of these, 6,494 units (341 types) were installed in operating plants, with over 4,600 in the two reactors in Yeonggwang.

“We will continue investigating all local reactors to see if any more safety warranties have been fabricated,” the commission said.

In a bid to allay growing public concern, the watchdog and government said that even though the parts lack the correct paperwork, they do not pose any significant safety threat to the running of the reactors.

“None of the parts in question play an important role in the plants. Most are minor accessories attached to the reactors outer shells,” said an official at the Ministry of Knowledge Economy.

One industry source likened them to fashionable cases that people buy to decorate their smartphones to keep them scratch-free.

“Unless the safety of the reactors is absolutely confirmed, operations can’t be resumed even if it risks causing a power shortage,” said Lee Geun-dae, a researcher at the Korea Energy Economics Institute. “But if the government has decided to get them up and running again, it means there is no threat posed by the parts or technology.”

Meanwhile, residents who live near the plants have been fiercely protesting the moves to get them back online since November. 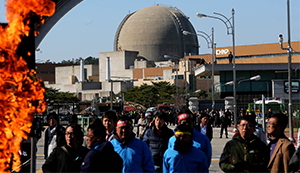 Residents in Yeonggwang, South Jeolla, urge the government not to fire up two stalled reactors at Yeonggwang nuclear power plant in November. The reactors began operating again this week.[YONHAP]

Experts say the problem stems from the current purchasing system of parts. Regional offices that manage the operations of each nuclear plant purchase the necessary parts, rather than having the head office buy them in bulk.

“As the suppliers are quite small, they prefer to save money by conducting their own technical tests with local organizations instead of getting certification from globally recognized entities,” said Kim Kyung-min, a professor of atomic power at Hanyang University.

“So it’s more like an ethical [than safety] issue due to the companies’ low sales. Another reason is that it’s quicker and easier to do it this way, and Koreans like practical efficiency over paperwork that takes a long time to process.”

While such safety protocols are ingrained overseas, they are often overlooked by the local industry, he added.

Safety certificates issued by U.S.-based United Controls International, which are accepted by the global nuclear power industry, cost about 3 million won ($2,825) for each type of part, according to the Knowledge Economy Ministry. So if a company wanted to sell 100 different kinds it would set it back 300 million won.

As President-elect Park Geun-hye is also set to reinforce safety measures on the nation’s nuclear power plants, the local industry has pledged to reform itself to regain the public’s trust.

To minimize the threat of bribery from suppliers, the KHNP will launch a new oversight team to set standards and receive quotas before shipments are approved, thus creating a layer of separation from the people making the purchase. The headquarters will also step in to control purchases of parts directly related to plant safety, it said.

The government said it will invest 5.6 trillion won by 2030 in nuclear plants construction and management to improve both safety and the competitiveness of the industry. About the half of the money will come from private funds.

Almost 2 trillion won will be spent to make operating plants safer, and slightly more than this on plants that have not yet been built.

The announcement came on Dec. 27, which Korea designated as “Nuclear Power Day” in 2010 to commemorate having shipped its first nuclear power plant to the UAE in 2009.

“As we commemorate this special day, we can look back on the mistakes we have made and take this as an opportunity to learn and start over,” said Minister of Knowledge Economy Hong Suk-woo.

At a celebratory event last week, the government announced a road map for nuclear power for the next 17 years called Nu-tech 2030.

The country is now designing an upgraded nuclear reactor called Advanced Power Reactor (APR) Plus, a bigger and safer version of what currently exists. This will be equipped with technology that can keep the reactor cool for three days even if external power supply is cut off. The catastrophe at the Fukushima Daiichi nuclear power plant in Japan in March 2011 was aggravated when the suddenly rising temperature caused a meltdown.

Until then, Korea will keep using its newest reactors, called APR 1400, at new plants scheduled to be completed by 2024. Their exact locations have not yet been decided. 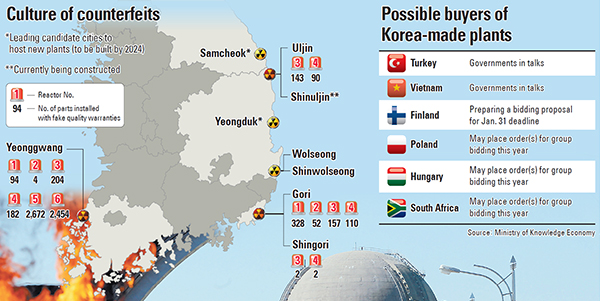 The controversy surrounding the parts has hurt Korea’s reputation as a nuclear plant exporter overseas.

“The damage is phenomenal,” said Professor Kim at Hanyang University. “Overseas officials now doubt whether documents issued in Korea are legitimate. Many have told me all trust has evaporated.”

He said the country now stands to miss out on future contracts to build nuclear plants. We were poised to win contracts to build four more nuclear reactors in the UAE, but now we have fallen behind rivals in France and Japan,” said Kim, adding that a delegation will head there soon to restore lost faith.

Meanwhile, the government and domestic energy organizations are trying to win contracts. The former has been putting together a bid proposal for a deal in Finland since last year, according to the Knowledge Economy Ministry. The two countries inked a nuclear power cooperation treaty in Helsinki, Finland, last May, and Korea considered itself a shoe-in to bag the contract until the parts controversy flared up. The deadline for submission is Jan. 31.

“We hope the two countries can still sign the deal,” Prime Minister Kim Hwang-sik told his Finnish counterpart when they met on the sidelines of the Asia Europe Meeting Summit in Laos in November, on the same day Korea confirmed it was using parts with fake quality warranties.

Korea is still talking to a number of countries including Turkey and Vietnam about plant deals.