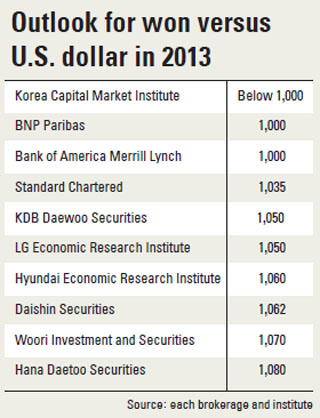 If the Korean won strengthens beyond 1,000 ($0.94) against the dollar this year as foreign investors increasingly tap what they see as a safe haven, more SMEs could find themselves in the line of fire as exports become less competitive.

The Korea Insurance Trade Corporation (K-Sure) said the break-even point for conglomerates is 1,059 won to the greenback, or 1,102 won for SMEs.

While this causes export-oriented industries to wince, local importers mostly benefit from the exchange rate changes.

The Ministry of Knowledge Economy forecasts that Korea’s exports will climb to a record high $570.5 billion this year, up 4.1 percent from last year. But many analysts say the exchange rate will dictate whether this target can be reached.

“As many companies’ investment sentiment has hit rock bottom, an appreciating won could hurt their performance and spur a longer economic slowdown in Korea,” said Kim Min-jeong, a research fellow at Hyundai Economic Research Institute.

The Korea Center for International Finance said a growing influx of speculative funds from overseas in the raw material market is likely as investors no longer live in such fear of risky assets in the wake of the recent fiscal cliff-averting deal in the U.S.

“If risks in the Middle East intensify further, the global crude oil supply crunch will push up oil prices, slowing the pace of the global economic recovery,” Korea Development Institute wrote in a report.

“The strong won and weak Japanese yen spell bad news for exporters and companies that compete with the Japanese in fields such as home appliances, IT and automobiles,” said Jeong Yeong-sik, a research fellow at Samsung Economic Research Institute. “It’s worse now as Korea is in a low-growth phase.”

Many financial institutions predict the won could hit or pass 1,000 won this year, depending on how developed countries fare. The Korea Capital Market Institute is extremely optimistic based on global economic stimulus plans in U.S., Japan and other countries and expectations of more foreign capital targeting Korea.

But analysts say a strong won will have a limited impact on the local stock market due to high levels of interest from foreign investors.