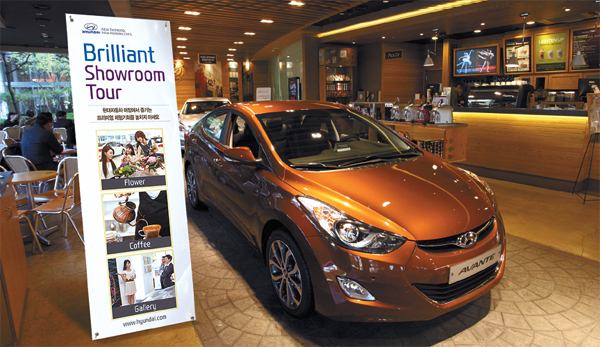 A U.S. coffee chain outlet in Seoul served as one stop on Hyundai Motor’s ‘Brilliant Showroom Tour” last year for owners of its cars, a marketing ploy it used to reward customers and boost sales. Customers were able to choose from a number of themed programs, including “flowers” and “coffee,” and were taken to various locations in the capital to learn more about their production and distribution. Provided by the company


Korean automakers sold more than eight million vehicles last year for the first time, but concern is mounting as they continue to struggle on the domestic front despite robust sales overseas.

According to data from five local automakers, their global sales totaled 8.19 million units in 2012, up 5.6 percent from the previous year’s 7.75 million units. Domestic sales slumped 4 percent on-year to 1.4 million units. This is the first time since 2008 that domestic sales marked negative growth.

GM Korea and Ssangyong Motors were the only two local carmakers to post gains at home last year.

Making matters worse, this year looks like a case of more of the same.

According to the Korea Automobile Manufacturers Association (Kama), local automakers’ domestic sales in 2013 will stay at around 1.4 million units. The government ended a consumption tax cut on the first day of the year, and Kama said this coupled with an uncertain economy will decrease demand for vehicles.

Rising sales of imports present another roadblock to stronger sales at home. Kama estimated that sales of imported cars will grow 13.6 percent to 150,000 units in this year. The nonprofit group for car manufacturers said that additional tax breaks from free trade agreements with the U.S. and European Union will attract more customers, while the introduction of small cars with affordable price tags will also appeal to Koreans.

Although sales of small cars will stay healthy as fuel economy ratings become more important amid high gasoline prices, Kama forecast that sales of mid- and full-size models will drop this year.

Kia’s K5 (Optima) and K7 (Cadenza) also marked double-digit negative growth in 2012, marking respective on-year drops of 10.9 percent and 14.9 percent. Sales of its K9 flagship sedan (Quoris), which was introduced in May, have also been poor.