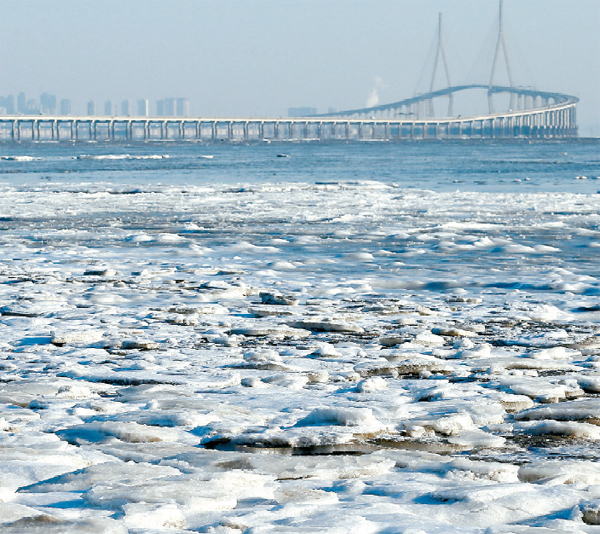 Sea waters off Incheon near the Incheon Bridge in Jung District, which connects to Incheon International Airport, are frozen yesterday after an ongoing cold spell that has swept the country. The coastal city’s temperature went down to minus 16.4 degrees Celsius (2.5 degrees Fahrenheit) yesterday, the Korea Meteorological Administration said.[YONHAP]


The cold spell dug in throughout the country yesterday, leading to an all-time record in power consumption and burst water pipes all over the place.

Skies were clear and there was no snow yesterday, but the mercury dropped to minus 29.5 degrees Celsius (minus 21.1 degrees Fahrenheit) in Hongcheon, Gangwon. Daily highs remained below zero degrees Celsius for most parts of the country.

According to the Seoul Metropolitan Government, the number of burst water pipes due to the freezing temperatures from Dec. 1 until Wednesday reached 2,979, an increase of 4.5 times compared to the same period last year when only 661 such cases were reported.

Due to the cold, electricity consumption hit another record level yesterday, the Korea Power Exchange reported, raising temporary worries of a power shortage like the blackout of Sept. 15, 2011.

“Thanks to the reactivation of the Yeonggwang-5 reactor early this week, which is now fully operational, the reserve rate managed to stay above the safe mark of four million kilowatts,” said Cho Se-cheol, an official at the state-run electricity regulator. “If the one-million kilowatt reactor in Yeonggwang [which resumed operation on Monday] did not provide the supply today, the reserves would have gone down by one million kilowatts, which would have forced us to issue an attention warning.” A second reactor has also been restored this week.

Reports of injuries on icy streets also flooded the emergency call center. The Seoul Metropolitan Fire and Disaster Headquarters said yesterday it had received 312 reports from victims of icy streets in Seoul since New Year’s Day.

The weather agency said the cold spell will continue to the end of this month with the temperature staying lower than the norm, which ranges from minus 6 degrees Celsius to 3 degrees Celsius. Frequent snowfall is expected in areas near the west coast.

The weather agency said the temperature will return to the average level early next month.

On the coldest day last month in Seoul, the temperature was minus 14.5 degrees Celsius, 3.9 degrees lower than last year.