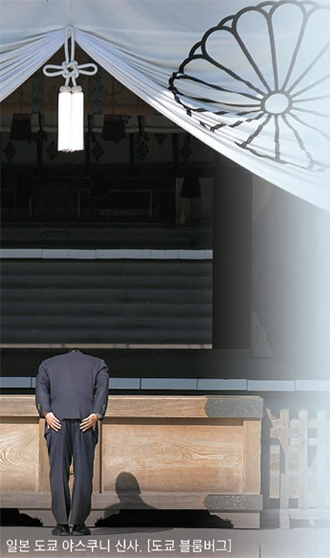 The Seoul High Court yesterday decided not to extradite Liu Qiang, the 39-year-old Chinese man arrested earlier last year for throwing firebombs at the Japanese Embassy in Seoul, to Tokyo, saying that Liu should be considered a political prisoner.

“We cannot approve the extradition of Liu to Japan because his crime was a political crime,” the court said in a statement yesterday. “In other words, Liu committed a crime with the aim to protest against [Japan’s] political order. And in a case where a political criminal makes an escape to another country [Korea], the criminal can be protected.”

Liu, from Guangzhou, was arrested and charged by Seoul police officials on Jan. 8 last year for throwing four Molotov cocktails at the Japanese Embassy in Junghak-dong, central Seoul. He received a 10-month jail term and was released on Nov. 8. Upon his release, both China and Japan had reportedly requested that Korea, through various diplomatic channels, send the Chinese man to their respective countries.

Japan wanted him as Liu confessed while under questioning in Seoul that he was the one who set fire to the Yasukuni Shrine in Tokyo in December 2011. Liu said he set fire to the shrine and also threw firebombs at the Japanese Embassy in Seoul out of anger over Tokyo’s refusal to apologize for its wartime misdeeds. His maternal grandmother was a Korean from Pyongyang who was forced into sexual slavery by the Japanese military during World War II. Tokyo requested Seoul hand over Liu after he is released based on a bilateral treaty signed in 2002 regarding criminal transfers, while Beijing appealed to Seoul that Liu be sent back home based on a “humanitarian approach.”

It also requested that Korea consider Liu a political prisoner - saying his crimes were a political reaction to Japan’s misdeeds. 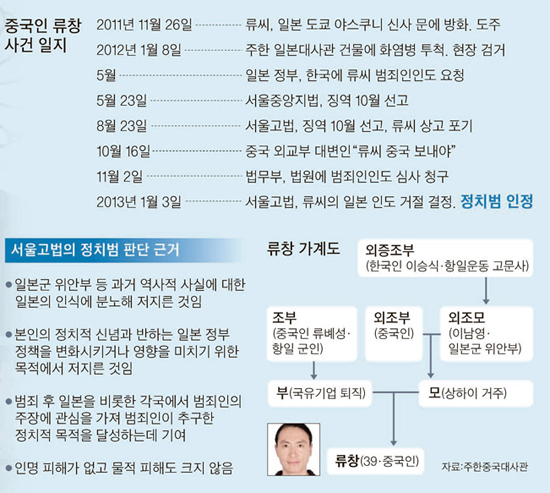 Seoul’s Ministry of Justice sent the case to the Seoul High Court, and the decision was made yesterday to send Liu back home. While waiting for the court’s decision, Liu was sent back to jail after he was released and went to trial.

The court yesterday added that Liu’s crime was not based on personal interests, but was out of anger over “Japan’s perception on women forced into sexual slavery by the Japanese military and policies related to that.” It also said that “the crime was committed to affect the Japanese government’s policies that go against his political beliefs.”

With the court’s decision, Liu was immediately released from jail yesterday.

“It looks like Liu will be returning to China,” said an official from the Justice Ministry.