Google’s Schmidt is on his way to North: Report

Google’s Schmidt is on his way to North: Report 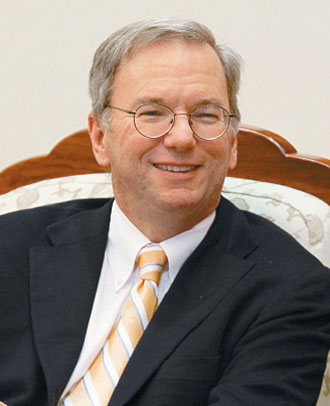 Schmidt will be traveling to the North with Richardson as early as this month, sources familiar with the group’s plans told the Associated Press yesterday on the condition of anonymity.

It wasn’t disclosed why a top leader of the world’s tech giant is visiting the reclusive communist country and whom he will meet there.

In late December, North Korea admitted that an American citizen of Korean descent, identified as Kenneth Bae or by his Korean name Pae Jun -ho, was detained Nov. 3 on suspicion of committing “hostile” acts against the state.

A high-ranking Unification Ministry official in Seoul said the group’s main purpose would be freeing the American.

“Although we can’t confirm whether they will indeed visit North Korea, we understand the plan in a context of previous visits of former U.S. presidents Jimmy Carter or Bill Clinton, who played key roles in getting their citizens released from custody,” the official told reporters in a closed-door meeting yesterday.

Another South Korean government official in the United States said the visit seemed to be private.

“I don’t think the visit was made through an official channel,” the official said, “because we were unaware of it.”

In January 2010, Former U.S. president Carter flew to Pyongyang to negotiate the release of Aijalon Gomes, an American teacher who walked into North Korea from China, and they left the country together. In March 2009, Clinton made a visit to retrieve American journalists Laura Ling and Euna Lee, who were sentenced to 12 years of hard labor on charges of illegally entering North Korea.

Richardson has officially visited North Korea five times, and two of his visits were to negotiate the release of captured Americans.

Speculation is also going around that Schmidt could find some business opportunities on the trip, penetrating the least Internet-friendly country, North Korea.

“The spread of mobile phones and new forms of connectivity offer us the prospect of connecting everybody,” Schmidt said in commencement speech at Boston University in May, quoted by AP. “When that happens, connectivity can revolutionize every aspect of society: politically, socially, economically.’’

Last year, Reuters reports, Google flew in North Korean defectors from Seoul for a panel discussion at a summit it hosted focusing on global illicit networks. It has also hosted North Korean officials in Silicon Valley, according to the Asia Foundation, which co-hosted part of a trip by the North Korean delegation.

“Like those scientists who conquered space, we should vigorously wage a war to elevate the nation’s overall science technologies,” Kim said.