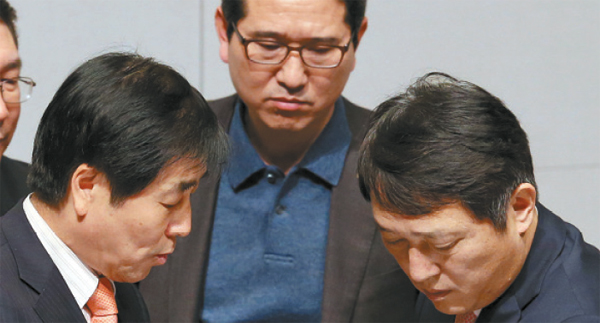 
Public criticism mounted yesterday over news that a group of lawmakers who held secret negotiations on this year’s budget to shovel out pork hopped on airplanes shortly afterward for Latin America and Africa for what they called “research on appropriations.”

Nine lawmakers from the ruling Saenuri Party and the opposition Democratic United Party left the country shortly after the National Assembly approved the 2013 budget at dawn on New Year’s Day, the JoongAng Ilbo reported yesterday.

The passage was far beyond the statutory deadline of Dec. 2 and the first time ever the legislature failed to approve the budget by the end of the year. 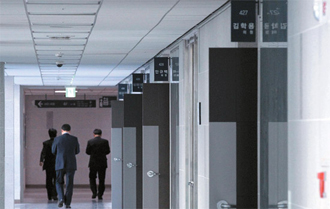 Representative Chang Yoon-seok of the Saenuri Party, who chairs the Special Committee on Budget and Accounts, was one of the nine. The rest were Saenuri representatives Kim Hack-yong, Kim Jae-gyeong, Kweon Seong-dong and Kim Sung-tae and DUP representatives Choi Jae-sung, Hong Young-pyo, Ahn Gyu-back and Min Hong-chul.

The lawmakers left for Africa and Latin America on research trips funded by the National Assembly. The purpose is to study the budget appropriations systems of African and Latin American countries.

The budget was approved at a plenary session of the National Assembly around 6:04 a.m. Tuesday. Later in the day, a five-man group including Special Committee Chairman Chang departed for an 11-day trip to Latin America.

After a stopover in Los Angeles, the five lawmakers were to visit Mexico, Costa Rica and Panama.

The second group of four, all members of the Subcommittee on Numbers Adjustment, left Wednesday afternoon. After a stopover in Dubai in the United Arab Emirates, they were to visit Kenya, Zimbabwe and South Africa.

“The trips were originally to begin in mid-December, but the delay in the budget passage changed our schedules,” one of the lawmakers told the JoongAng Ilbo.

Their trips were paid for using the budget earmarked for the Special Committee on Budget and Accounts. About 150 million won ($141,376) was spent on the nine lawmakers’ airfares, lodging and other travel expenses.

Speculation also mounted that the lawmakers departed hurriedly without informing their party leadership because the budget for the trip had to be spent by Jan. 15.

In a phone call with the JoongAng Ilbo yesterday, Representative Kim Jae-gyeong of the Saenuri Party, who was talking from Mexico, admitted that.

“We rushed somewhat because of the budget,” he said.

The controversy was particularly apt because of revelations of secret dealings to dole out the pork in the budget bill.

Special Committee Chairman Chang and the two chief negotiators from the Saenuri Party and the DUP spent three days in the Lotte Hotel in Seoul and another three days in the Lexington Hotel in Yeouido to fine-tune the details of the budget. Based on their secret dealings, this year’s 342 trillion won budget bill was finalized.

During the month of December, the subcommittee only held three sessions on Dec. 3, 4 and 21, while most negotiations were done in the hotels. Subcommittee lawmakers were already criticized for using their power to make adjustments of up to 50 billion won each to give favors to their electoral districts or fulfill other requests.

The Munhwa Ilbo reported yesterday that the lawmakers on the Subcommittee on Numbers Adjustment left records of only the meetings that cut the state budget. Although the subcommittee increased the budget by 4 trillion won since Dec. 4, no minutes of the negotiations were recorded.

The records of the subcommittee showed that the chief negotiators of the ruling and opposition parties were given complete power to decide the budget increases, and they apparently held meetings in hotel rooms to decide the specifics.

A Saenuri Party official expressed concern about the situation. “Who can possibly accept that the lawmakers are researching budget review systems in Latin America or Africa?” asked the official. “During the presidential election, the public disgust with business-as-usual politicians was clearly shown, but they obviously failed to learn any lesson.”

In an interview with BBS radio, Representative Roh Hoe-chan, head of the Progressive Justice Party, urged the lawmakers to cut their trips short.

“Lawmakers can, of course, have overseas trips to work better,” he said. “But taking into account the timing and what happened until now, it was inappropriate. I think they must return now.”

Despite rising public rage over the trips, the leadership of the Saenuri and Democratic United parties were blase.

Representative Lee Hahn-koo, floor leader of the Saenuri Party, said it was regretful the lawmakers failed to anticipate the sensitive timing and emotions of the public. His DUP counterpart, Park Ki-choon, sent text messages to party lawmakers to refrain from taking unnecessary trips.

Representative Chang, also in Mexico, telephoned the JoongAng Ilbo yesterday and issued an apology about the situation. He said he will have a discussion with the other lawmakers to decide whether they will cut the trip short and come back to Korea early.