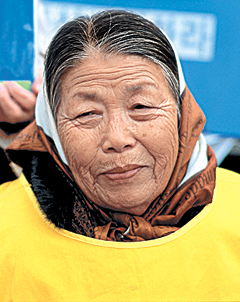 One more Korean woman who was forced into sexual slavery by Japan during World War II died yesterday, a civic group said, raising concerns that the aging victims may die before receiving compensation or apologies from Tokyo.

At the age of 92, Hwang Kum-ju died earlier in the day, according to the Korean Council for the Women Drafted for Military Sexual Slavery by Japan.

Her death put the number of South Korea’s government-registered surviving victims of Japan’s enforced sexual enslavement at 58, the council said. Initially, a total of 234 victims were on the list.

After being deceived by Japanese officials who promised her a job in a munitions factory, Hwang had been forced to work at a military brothel for about three years from the age of 20, according to the group.

“She has been active to let the world know of the bare facts about colonial Japan’s atrocities,” said a council official. “We will continue to launch diverse campaigns to have Japan resolve the sex slavery issue.”

Historians say up to 200,000 women, mostly Koreans, were coerced into sexual slavery at front-line Japanese military brothels during World War II. Moreover, former sex slaves, who are euphemistically called “comfort women,” have long testified about the hardship they were forced into.

Seoul has increased pressure on Tokyo to resolve the grievances of the victims, saying the issue is becoming increasingly urgent as most victims are elderly, well over 80 years old, and may die before they receive compensation or an apology from Japan.

Japan, however, has been ignoring calls for official talks on compensating the aging Korean women.