A Seoul court has ordered a sex offender to be chemically castrated for the first time since the law went into effect in 2011.

The Seoul Southern District Court headed by SeniorJudge Kim Ki-young sentenced a 30-year-old man surnamed Pyo, who was charged with raping five minors, to receive hormonal treatment that is intended to suppress his sexual impulses for the next three years.

The court also sentenced him to: 15 years in prison; to wear an electronic tracking device on his ankle for 20 years; to post his personal profile with a picture of his face and name on the online sex offender registry for 10 years; and to complete 200 hours of psychotherapy sessions. 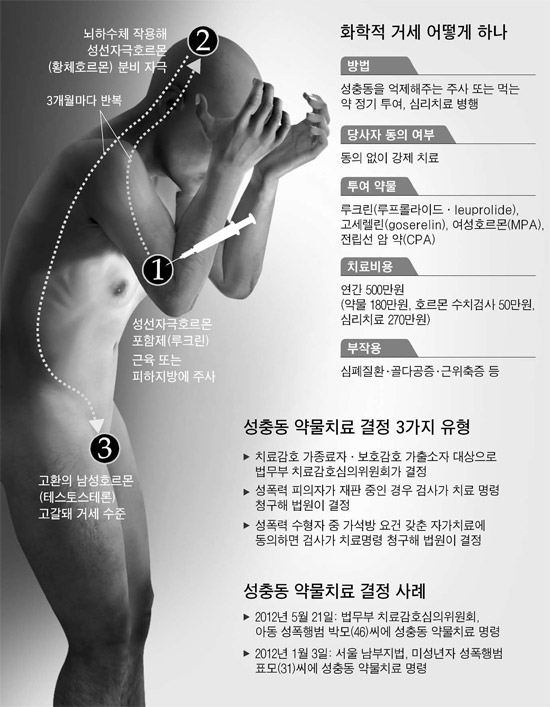 “The suspect was previously convicted of multiple counts of rape and committed the same crime less than three years after he was released from prison,” Kim said in the ruling.

“The suspect has committed multiple sex crimes against many victims and seems to have a sexual disorder, leading us to judge that it is impossible for him to control himself.”

He continued, “We believe that the treatment will help reduce the suspect’s sex drive. We ordered three years of treatment as he seemed to be a serious sexual deviant.”

The law allowing chemical castration was passed in the National Assembly in June 2010 and went into effect in July 2011.

Chemical castration is intended to treat sex offenders who are 19 and older and who have committed crimes against children younger than 16.

The suspect met five teenage girls through a smartphone chat service and had sex six times over seven months since November 2011 while working as a barista. He also gave the girls money.

He taped them having sex and took nude pictures of the girls. He then blackmailed them into more sex by threatening to spread their videos and pictures indiscriminately on the Internet. He also threatened the girls with deadly weapons.

“Though the suspect confessed his crime, the nature of his crime is particularly heinous because he clearly bought sex from minors and even raped them after recording their behavior,” Kim said in the ruling. “The victims experienced extreme sexual humiliation and are also asking for strong punishment.”

In May last year, the Forensic Psychiatry Deliberation Committee under the Ministry of Justice decided to chemically castrate a 45-year-old rapist surnamed Park, who was imprisoned several times for attempted rape and for raping children.

His castration treatments began in July of last year.

There are six more pending cases of the prosecution requesting a court chemically castrate sex offenders.

The Daejeon District Prosecutors’ Office requested a court give the same punishment to a sex offender surnamed Lim, 35, in September last year, and prosecutors’ offices in Seoul, Busan, Incheon and Gwangju later requested chemical castration in other cases.