Rain is in love, and in the dog house

Rain is in love, and in the dog house 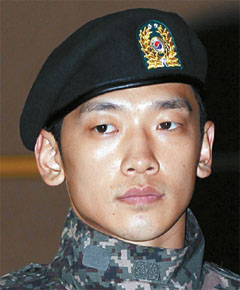 K-pop star Rain will be punished by the military for dating Korea’s sweetheart Kim Tae-hee on the military’s time.

“Cpl. Jung Ji-hoon was off base for public affairs, which was to practice [his songs],” Ministry of National Defense spokesman Kim Min-seok said in a briefing yesterday. “But during his meetings with actress Kim, he had private contacts [with her], which is a violation of service rules.”

“The battalion that Jung belongs to will convene a disciplinary committee meeting next week,” Kim said, “and take proper measures against him to ensure fairness with other soldiers.”

On New Year’s Day, a series of paparazzi photos showed Rain on dates with actress Kim over the past couple of months, including during the Christmas holidays. Later that day, the talent agency of the 33-year-old, SNU-educated Kim officially admitted their romance.

The publicity could backfire on the 31-year-old Rain, who is being accused of cheating on his two-year mandatory military service.

The Defense Ministry launched a probe on Wednesday based on the paparazzi photos and other information. It said Rain went to a recording studio in Nonhyun-dong, southern Seoul, on Nov. 23, Dec. 2, and Dec. 9, and returned to his base together with Kim in her car, which the military considered “private contact.”

Rain also didn’t wear his military cap when he was in uniform, the ministry said.

The ministry said that Rain had “admitted his faults.”

“It is unlikely that Jung will be locked up in a military jail,” spokesman Kim said, suggesting he may receive light punishment for his transgressions, such as restricted holidays.

Rain’s main job is providing programming for TV and radio broadcasts to promote the military.

The story has reopened debate on celebrities having an easier time in the military than ordinary Korean men.

Jin Sung-joon, an opposition Democratic United Party lawmaker, said yesterday that 32 celebrity soldiers discharged between November 2009 and September 2012 received an average of 75 days of holidays, compared to 43 for ordinary soldiers.

“Considering the fact that he is on duty, Jung is enjoying excessive benefits,” Jin said. “In principle, he is not supposed to stay a night outside his base.”