The year 2013 isn’t light on the performing arts. Operatic giants Giuseppe Verdi and Richard Wagner, who both mark the 200th anniversary of their births this year, will be getting a lot of attention.

Numerous licensed and creative musicals will also be staged including a Korean production of “Rebecca,” which kicks off this month, and the original team’s “Mamma Mia!” scheduled to take place in November for the first time.

Mark your calendars for the following upcoming classical concerts, operas, ballets, musicals and plays that are not to be missed.


Classical operas
Numerous classical concerts and operas being performed this year are centering around two of the world’s greatest composers ever, Verdi (1813~1901) and Wagner (1813~1883), while orchestras from both home and abroad will play under the baton of some of the best maestros from around the world.

The Korea National Opera has especially devoted the year’s schedule to works of the two operatic giants. Among Verdi’s works, the KNO will stage “Falstaff,” a commedia lirica in three acts in March, followed by “Don Carlo,” a five-act grand opera in April.

According to the KNO, it chose the two works to “give contrast” and to “show the diversity of Verdi to a Korean audience.”

“Falstaff” is Verdi’s last work among a total of 27 operas he composed throughout his lifetime. It is his only commedia lirica. The rest of Verdi’s works are based on true historical events and are mostly tragedies.

“This work, we believe, is significant in Verdi’s life not only because it’s his last work but also because it’s the only comedy, which reflects his thought that life, after all, ends in comedy,” said Lee Seung-jin, an official from the KNO.

“Don Carlo,” on the other hand, takes place in Spain during the 16th century and is known to be one of Verdi’s operas and is regarded as the one with the greatest artistic value.

Among Wagner’s works, the KNO decided to stage in October his last completed opera, “Parsifal,” which is loosely based on Wolfram von Eschenbach’s “Parzival,” the 13th-century epic poem of the Arthurian knight Parzival and his quest for the Holy Grail. 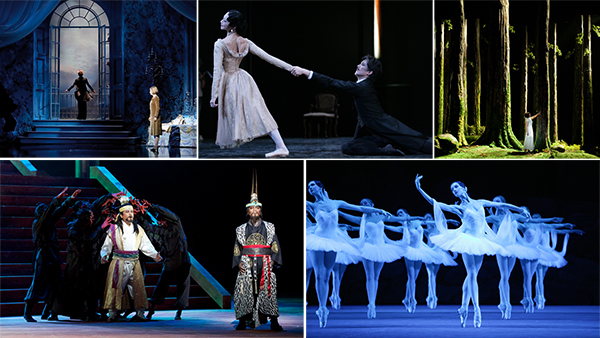 The Israel Philharmonic Orchestra under the baton of Zubin Mehta will hold a “New Year Gala Concert” tonight and tomorrow at 7 p.m. at the Seoul Arts Center. As a new year celebratory concert, the orchestra will play Johann Strauss II’s waltzes and polkas.

Rattle will present his signature piece, Stravinsky’s “The Rite of Spring,” which he will conduct at the Lucerne Festival in August of next year, as well as Bruckner’s Seventh Symphony.

Other concerts on this year’s classical calendar include Les Musiciens du Louvre, which specializes in French classical music, under its conductor Marc Minkowski in March, as well as Deutsche Kammerphilharmonie under the baton of Paavo Jarvi in December for the first time in Korea.

Korea’s musical industry has been growing rapidly over the past few years. Some Korean productions of licensed musicals have been heading to Europe and Japan. This year, musicalgoers will be delighted with numerous productions heading to the peninsula.

“Rebecca,” a musical that continues the tradition of the Vienna musical, will start off the year with its first show on Jan. 12.

“Rebecca will surely attract musicalgoers in Korea as the story is quite different from any of the musicals that had been staged in Korea before,” said Robert Johanson, the director.

In February, creative musical “Sajjagi Opsoye,” a title in Jeju dialect which translates to “Come Gently.” The musical has been remade to fit the tastes of musicalgoers of the 21st century, from the original “Baebijangjeon,” which is the first creative musical in Korea from 1966.

The musical “Wicked,” a sell-out production last year, will be done in Korean in December. The original production of “Mamma Mia!” will also be coming to Seoul for the first time as well in November.

Overseas theatrical plays are especially filling up the calendar this year. The Myeongdong Theater is inviting a Japanese production of Shakespeare’s “Macbeth” in March while the LG Arts Center is inviting Lev Dodin and the Russian Maly Drama Theater to stage plays “Three Sisters” in April and “The Tempest” in October, respectively.

Several ballet and modern dance companies are also planning “something new and different” this year. Excluding numerous ballet and dance companies’ repertoire of famous works including “Swan Lake” and “The Nutcracker,” the Korea National Contemporary Dance Company will stage “Byeok-oh-geum-hak” in April while the Universal Ballet Company is preparing to stage “This is Modern,” a three-dancer modern ballet, in October.

Watching gugak, or traditional Korean music, performances isn’t everyone’s cup of tea. This year, however, gugak musicians have especially made efforts to break through the stereotypes that Koreans have towards their own traditional music.

The National Changgeuk Company of Korea is unraveling the Greek tragedy “Medea” into changgeuk, or a traditional Korean opera, which is scheduled to be staged in May.

It is also making efforts to turn “Seopyeonje,” a changgeuk based on a story of a family of traditional Korean pansori (narrative singing) artists trying to make a living in the modern world, into a film as well as a musical.