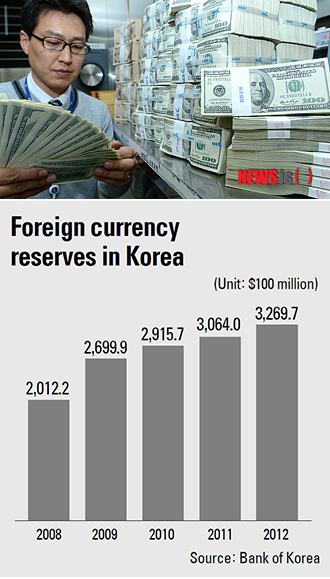 The country’s foreign reserves reached $326.97 billion in December, up $880 million from the previous month, according to the Bank of Korea.

The central bank said that it posted higher investment profits by managing the foreign exchange reserves and saw a gain in the conversion value of non-dollar assets.

In December, the euro appreciated 1.9 percent on-month to the dollar while the yen shed 4.3 percent to the greenback.

Despite some fluctuations, the FX reserves have been on the rise, aided by sound exports and inflows of foreign capital.

The BOK also said it increased its holdings of gold to 84.4 metric tons (90.04 tons), valued at $3.76 billion in November, the fourth purchase of the precious metal since July 2011. The move aims to diversify its portfolio of foreign exchange reserves.

As of the end of November, Korea was the world’s seventh-largest holder of foreign exchange reserves.