Samsung to show largest UHDTV in world at 2013 CES

Samsung to show largest UHDTV in world at 2013 CES 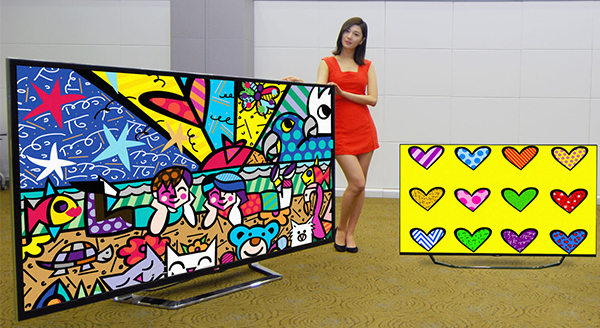 A model presents LG Electronics’ UHDTVs with screen sizes of 55 inches, right, and 84 inches. Both LG and Samsung will introduce UHDTVs in various sizes at the 2013 Consumer Electronics Show, which kicks off on Tuesday in Las Vegas.


Samsung Electronics will unveil a 110-inch ultra high-definition (UHD) TV, the largest of its kind, at the Consumer Electronics Show (CES) that kicks off in Las Vegas on Tuesday.

The focus for this year’s event for the Samsung flagship and its top domestic rival LG Electronics seems to have evolved beyond devices that are merely “smart” to ones that offer extraordinary definition and large-size screens.

Samsung will display its latest innovations at a booth spanning 2,602 square meters (28,007 square feet), the largest among all participating companies at the four-day event. By incorporating over eight-million pixels, the new UHDTV boasts four times the resolution of regular LCD HDTVs, the most popular current generation of sets. A smaller UHDTV with an 85-inch display will also be presented for the first time, as Samsung’s CES teaser hinted earlier on YouTube. 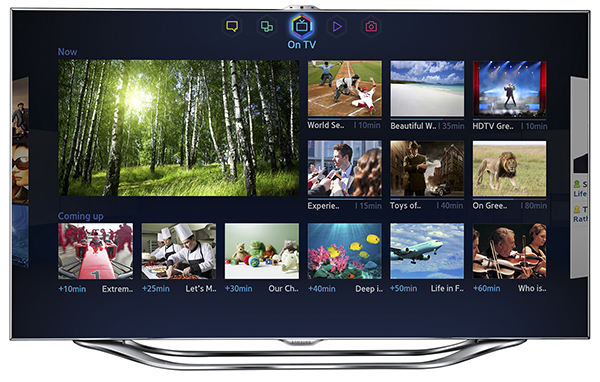 Samsung Electronics will unveil a renewed version of its “Smart Hub,” a platform embedded with the producer’s smart TVs, at the CES. The next-generation operating system has redesigned the screen so the users can browse five different content categories ranging from on-air TV broadcasting to VOD and Internet.


LG will debut 55-inch and 65-inch models, beefing up its UHD lineup, which was initiated by its launch late last year of an 84-inch UHDTV, then the world’s largest. The second-largest TV producer in the world said it would also introduce a “Cinema Beam TV,” which has a 100-inch high-definition screen.

The UHDTV market has an upbeat outlook, industry data show. According to DisplaySearch, UHDTVs are expected to sell 500,000 units this year globally. It predicts the sales figure will more than quadruple to 2.21 million units next year and 4.64 million in 2015.

“Consumers’ appetite for high-quality, large TVs has been growing,” said Kim Ji-san, an analyst with Kiwoom Securities, “But existing HDTVs had the drawback of offering lower resolution when their screen size grew to 60 inches. UHDTVs, on the other hand, are able to produce much more sophisticated and natural video quality.”

Samsung and LG have been waging a tug-of-war over OLED TVs since last year. Earlier this month, LG officially launched its 55-inch OLED TV, which is now on sale in Korea for 11 million won ($10,330). Samsung is expected to follow suit, but it has yet to announce a release date for a same-size model.

OLED offers brighter colors, as each pixel has its own light source, and the screens are thinner as they do not require a backlight. But because of the technological difficulties in mass producing large-size OLED displays, many manufacturers seem to prefer devoting their energies to UHDTVs.

There have been rumors that Samsung, the world’s top smartphone producer, will showcase its highly anticipated Galaxy S4 smartphone at the show, a follow-up to its immensely popular Galaxy S3. But sources say it is more likely to be unveiled at the GSMA Mobile World Congress, which opens on Feb. 25 in Barcelona, with handsets to hit stores globally in March at the earliest.

“Given that TVs are one of the key products at CES, there won’t be any smartphone-related previews or showcases,” said a Samsung spokesman. 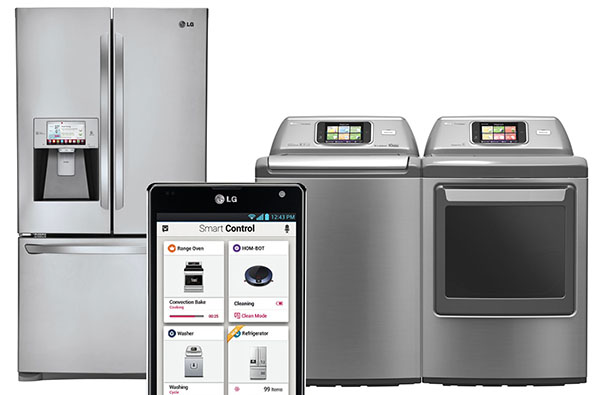 LG Electronics will present a 5.1-cubic-feet drum washing machine, right, and a refrigerator with a 33-cubic feet capacity, shown in the photo - both largest available in the United States, at the upcoming fair. They can be remotely controlled by a near field communication function embedded on LG smartphones. Provided by the companies


The two tech giants are also expected to continue their rivalry in the smart TV field.

Samsung will unveil an upgraded version of its Evolution Kit, which it introduced for the first time at last year’s CES. The device, when attached to the back of a Samsung Smart TV, offers all the latest features that smart TVs to be released this year offer.

LG, on the other hand, will boast an enhanced “voice search” feature with its 2013 Google TV, embedded with Google’s latest platform.

This year, Samsung Chairman Lee Kun-hee won’t visit the event, despite having done so in past years. Heir-apparent Jay Y. Lee, who was promoted late last year to a vice chairman at Samsung Electronics, will be going on his own and is scheduled to visit the venue on Wednesday.

The event will see a handful of Hollywood celebrities, music icons and politicians attend as guests. U.S. President Bill Clinton will join Samsung’s presentation scheduled for Wednesday at the Venetian Hotel. But while Stephen Woo, president of Samsung’s device solutions business, will give a keynote speech about the role of tech components needed for product innovation, Clinton’s role remains open for conjecture. He is likely to either give a speech or introduce a new product.

Other big names include Maroon 5, which will be making a guest appearance at Qualcomm’s pre-show CES keynote address on Monday, and Black Eyed Peas’ will.i.a.m, a founding shareholder in Beats Electronics, the producer of Dre headphones, will be a featured panelist on the Next Generation of Innovators discussion on Tuesday.