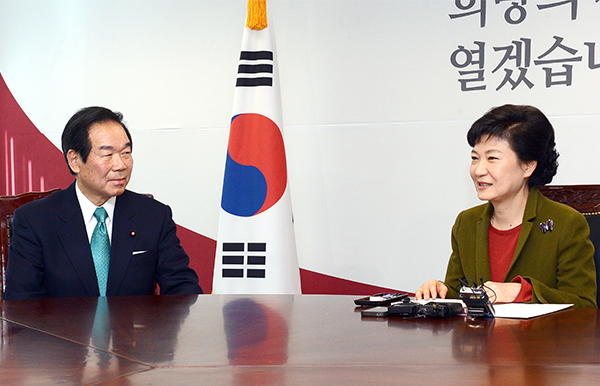 
A delegation of special envoys from Japanese Prime Minister Shinzo Abe paid a call on President-elect Park Geun-hye yesterday, amid apprehension over Abe’s far-right stance on territorial disputes and unresolved historical issues between the two countries, like the wartime sex slaves.

For her first official diplomatic meeting, Park met with the delegation at her new office in central Seoul.

Nukaga delivered a letter from Abe to Park.

“The president-elect met with the three envoys at a guest room in Tongui-dong, central Seoul, for about 30 minutes,” Cho Yoon-sun, a spokeswoman, said at a briefing after the meeting. “The leader of the delegation said they hope the new administrations of Korea and Japan will make a good start for bilateral relations between the two countries. He said Japan regards Korea as a very important neighbor that shares common values of democracy and market economy, and they sought close cooperation with Park in various sectors.

“In response, Park congratulated them on the inauguration of new Prime Minister Abe,” Cho said. “She also called for building up mutual trust in accordance with public sentiment.

“She said it is important to build up a friendly mood between two nations,” Cho said, “and emphasized directly facing history and heading toward reconciliation and the future.”

The meeting came as ties have been frayed by the longstanding dispute over Korea’s easternmost territory of Dokdo, which Japan calls Takeshima, and controversial historic issues such as Japan’s refusal to apologize and compensate the so-called comfort women from World War II.

A day before the delegation’s arrival, an anti-Japan Chinese national was released by a local court in Seoul and ordered him to be repatriated to China. He was deported yesterday. Tokyo had requested he be extradited to Japan to be tried for setting fire to the Yasukuni Shrine in Tokyo in December 2011.

The media speculated that the delegation from Abe could raise the issue of the Chinese activist.

To protest the envoys’ visit, a South Korean activist stabbed himself.

Kim Chang-geun, a 63-year-old member of a Seoul-based conservative civic group, stabbed himself in the abdomen during a press meeting protesting the envoys’ visit at Gimpo International Airport. The Japanese envoys hadn’t arrived yet.

Kim was taken to a nearby hospital for non-life-threatening injuries. Kim rammed a truck into the Japanese Embassy in Seoul in July 2012.