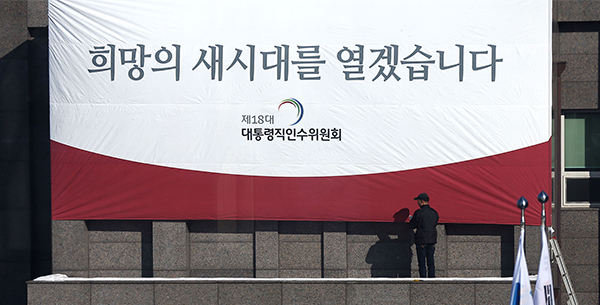 While Professor Park served on the president-elect’s campaign as an adviser on political reform, Yoo was seen as a fresh face because he reportedly had no special tie with Park in the past.

Kim Jang-soo, former defense minister in the Roh Moo-hyun administration, who worked as a security policy adviser in Park’s presidential campaign, was chosen to head a foreign, defense and unification affairs subcommittee.

Representative Yoo is a first-term lawmaker who worked most of his career as a financial official. He served as deputy minister of strategy and finance from 2010 to 2012. Representative Lee shares a similar background. Until he was elected a lawmaker for the first time last April, he worked in the commerce and trade ministry for decades and served as the head of the Small and Medium Business Administration from 2006 to 2008.

The law allows the president-elect to create a transition team with one chairman, one deputy chairman and up to 24 senior members. Park appointed Kim, 74-year-old former chief justice of the Constitutional Court, as the head of her team and Representative Chin Young, chief policy maker of the ruling Saenuri Party, as the deputy chair last month.

Han Gwang-ok, head of a special committee on national unity, was included as a transition team member. 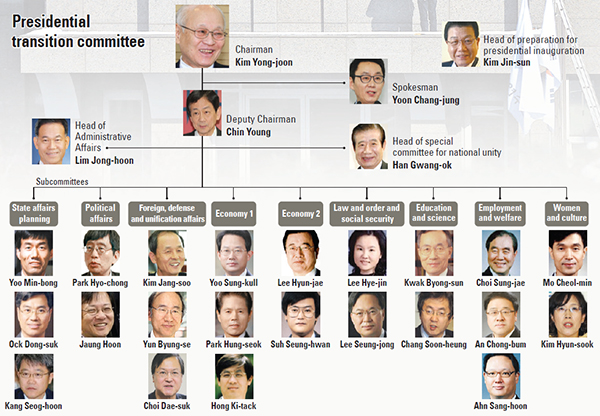 Jaung Hoon, a political science professor at Chung-Ang University, was named a member of a political affairs subcommittee.

Yun Byung-se, who served as the Roh Blue House’s senior secretary for foreign and national security affairs, was named a member of a foreign, defense and unification affairs subcommittee. Choi Dae-suk, a professor at Ewha Womans University specializing in North Korea studies, was also named to the committee.

“The goal of this team is to create the draft of the new administration’s philosophy and policy platform to prepare for a smooth launch of the new government,” Kim Yong-joon said.

Park largely recruited policy makers from her campaign while leaving out her political allies. Of the 24 transition team members, 14 were from Park campaign’s committee on people’s happiness. The committee produced key economy, education and welfare pledges during the campaign.

The two professors in charge of the political affairs subcommittees also served in the Park campaign’s political reform special committee.

“Park also promised to listen to the leaders of the opposition parties during the transition process,” Park Sun-kyun, Park’s spokesman, said yesterday.