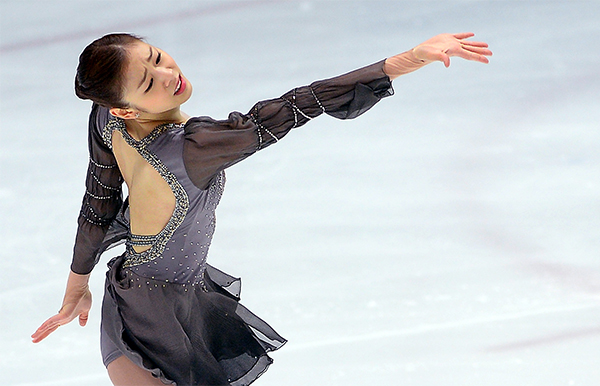 Kim Yu-na performs during the free skate of the Korean national championships held at Mokdong Ice Rink in western Seoul yesterday. Kim won easily with a stunning 210.77 points, brightening her prospects for the world championships in March. [NEWSIS]


Kim Yu-na has set her sights on winning the world title after she became the champion of Korea yesterday, just months after returning to international competition.

“If I fully execute what I have prepared, I think it will not be too difficult to win the world championships,” Kim told reporters after winning the national championships held at Mokdong Ice Rink in western Seoul.

Kim, 22, the 2010 Vancouver gold medalist in women’s figure skating, received 145.81 points in the free skate yesterday for a formidable 210.77 total points score. It is the first time that she or any other Korean figure skater has recorded more than 200 points in winning the national title.

Kim has won four national titles previously, but not since 2006.

She won the short program on Saturday with 64.97 points, building a more than 10-point lead over the runners-up, but it was a shaky start for the indisputable favorite, who fell several times.

She regained her composure yesterday with almost perfect execution of her routines.

“As I ended up with 64 points in the short program, I thought 200 points would be difficult, so tried to focus on doing what I am supposed to do rather than trying to get a high score,” Kim said. “I am happy that I could perform well for the fans in what could be my last domestic event.”

Kim, who sat out of competition since her runner-up finish at the 2011 world championships in Moscow in April 2011, returned to the ice last July after announcing that she would officially retire following the 2013 Sochi Olympics.

She eased concerns over her condition with a victory at the NRW Trophy in Dortmund, Germany, last month. She received 201.61 points at NRW Trophy, the first time a figure skater surpassed the point in an international event in the 2012-13 season.

The results in the upcoming world championships, to be held in Canada in March, will be a clearer gauge of whether she will be able to defend her Olympic title, but there is more at stake.

If she manages a top-10 finish at the world championships, two Olympic berths will be given to Korea. A top-two finish will earn three berths for Korea.

Kim previously said that she would try to bring at least two Olympic berths to Korea from the world championships.

“At the world championships, I want to have a clean and flawless performance,” Kim said. “Winning the most Olympic spots available as I can is my goal.

“For any athlete, the performance at the world championships are affected by many variables, so it is not easy to do it perfectly,” Kim said. “That’s why I need to practice.”