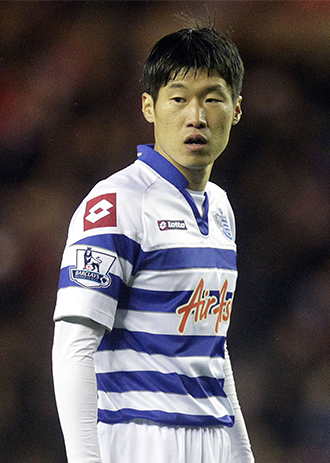 Park Ji-sung of Queens Park Rangers said that he has fully recovered from a knee injury after he made his first start in 76 days in a 1-1 draw against West Bromwich Albion in an English Premier League FA Cup match on Saturday.

It is the first time that the 31-year-old Korean midfielder has started on the pitch since the former captain played against Everton on Oct. 21.

Although he did not score, it was a solid comeback. Football media Web site Goal.com named him the Man of the Match in the Saturday’s game. The two teams will play against each other again in an FA Cup match at West Bromwich.

The injury was the main reason he has been on the sidelines, but as his absence continued, speculation grew that the former Manchester United star fell out of favor with the new QPR manager Harry Redknapp, who has openly criticized the new signings for their lack of contribution to the club.

Park did not wear the captain’s armband in Saturday’s game, but he played down the significance. He said his priority in the new year is to help the bottom-dwelling team survive relegation.

The following are the excerpts from an interview after Saturday’s match.

Q. What are your thoughts on your comeback game?

A. We were down in the match but we didn’t’ give up and got the draw. [Kieron Dyer scored an injury-time equalizer for QPR.] The team has built confidence and we don’t lose easily. That’s why we got a good result today.

You made a comeback after a long absence. How is your condition now?

I have fully recovered from the injury. But I have been away from the field for a long time. I think it will take some more time for me to improve my overall condition.

You did not wear the captain’s armband today. What happened?

Clint Hill [34-year-old defender] wore it today. It was at the coach’s direction and I don’t think it’s something that I should be bothered about.

QPR is tied for the worst record in the league with 13 points on 21 games. What is the most difficult aspect for you?

The most important thing is that players do not give up. Fortunately, the team isn’t down right now. That’s why I believe the team will have better results soon.

The manager has been replaced. Was there any difficulty that you suffered because of that?

No. There is no particular thing that I feel is difficult. Just because coaches are replaced does not mean that the attitude and mood of the players should change. I think the new coach is building the team well.

The year of 2012 brought much change, including the transfer. How do you evaluate last year?

There was an injury. I also transferred to a new team. It was indeed an eventful year.