Barriers on sexuality ‘Fade Away’

Barriers on sexuality ‘Fade Away’ 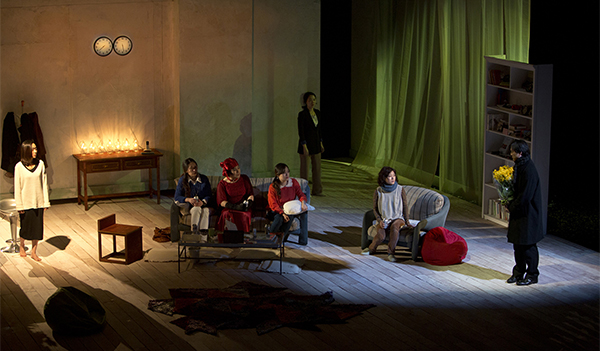 A photo of the set of “Fade Away” directed by Lee Hae-seong. Provided by the Namsan Arts Center


The play “Fade Away” opens with four women, some lying, some sitting, all fixing their gaze on a television screen in a dim-lit living room. The mini-series they’re watching is titled “Fade Away,” but the parallels between the play and the drama on the small screen stop there.

What is important in the opening scene is the togetherness of the group, which is to be joined soon by the host. Passive as the scene may seem, it sets the tone for the strengthening of friendship and love that keeps them from falling apart under the weight of tragedy.

Lee Hae-seong, the playwright and director, said the play is a story about borders and taboos.

“There are many boundaries in this society that we have created for our existence, but those outside the boundaries end up being the subject of exclusion,” Lee said.

“The characters of this play are all standing on the borders, fearing the consequences of completely moving over the line.”

Mal-bok abandoned his wife and their young daughter to come to terms with his feminine side, and the women, all in their mid-30s, have known her as a transexual since they came to visit Yun-ju during high school.

The reunion in the apartment was to mark the first anniversary of Yun-ju’s death, but the opening mood was far from solemn with the five women engaging in no-holds-barred girl talk, chatting in full earnest about their desires to eat, poop and sleep around - in more vulgar language.

The embarrassingly candid, hilarious dialogue evolves gradually into a serious, gloomy discussion as the problems facing each of characters are revealed.

Dong-ji, who is single, finds herself on the verge of having an affair with a married man. Sang-gang, a divorcee, has to say farewell to her daughter who is about to leave for Canada with her ex-husband and his new wife.

More shocking revelations are revealed throughout the conversations in the apartments with a series full of character development packed into one play.

Mal-bok is what makes the performance so gripping. His lifelong struggle to find peace with his sexuality is accentuated by two identical clocks on the stage, inspired by a similar work by Cuban artist Felix Gonzalez-Torres entitled “Perfect Lovers.” Park Yong-soo, 56, a veteran theater actor, did well with the role.

“I hope many boundaries and borders dividing people in our society go away so that people do not suffer,” the director Lee said. “That hope is also reflected in the title, ‘Fade Away.’”

* The play, “Fade Away,” is being staged at the Namsan Arts Center in Seoul until Jan. 20.