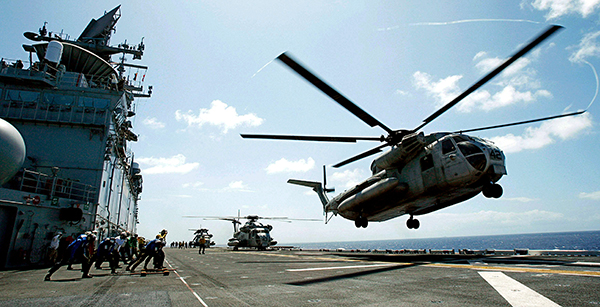 The United States military has entered a period of historic change after more than a decade of war following the terrorist attacks of Sept. 11, 2001. We ended the war in Iraq; we are implementing an effective transition and drawdown in Afghanistan; and we have seriously weakened Al Qaeda’s leadership in the fight against terrorism.

As a result of these efforts and the reality of budget constraints, the U.S. has developed a new defense strategy for the 21st century, one that emphasizes agility, technology and force projection. We have begun to focus on the challenges and opportunities of the future, and it is clear that many of them lie in Asia.

After all, the global center of gravity is steadily shifting toward the Asia-Pacific, tying America’s future prosperity and security ever more closely to this fast-growing region. At the same time, increasing military spending, challenges to maritime security, non-traditional threats ranging from piracy to terrorism and the destruction wrought by natural disasters are making the region’s security environment more complex. For these reasons, the U.S. Department of Defense is implementing a “rebalance” of America’s strategic focus and posture to the Asia-Pacific.

The vast majority of America’s rebalance comes in non-military areas like trade and development. This is part of a broad effort directed by President Barack Obama to deepen our diplomatic, development, economic, security and cultural engagement across the region. For the Department of Defense, the rebalance is about helping to ensure that the U.S. and all countries in the region continue to benefit from a secure and prosperous Asia-Pacific - as we have for nearly 70 years.

This effort rests on four pillars. The first is America’s longstanding commitment to a set of principles that helped to advance peace and security in the region in the 20th century. As a Pacific power, the U.S. has an abiding national interest in a just international order that emphasizes states’ rights and responsibilities and their fidelity to the rule of law; open access for all to the global commons of sea, air, space and cyberspace; unimpeded economic development and commerce; and resolving conflict without the use of force. These principles can and should underpin strong economic, diplomatic and military relationships throughout the region today.

The second pillar is a special priority of mine: modernizing and strengthening America’s alliances and partnerships in the region, and developing new ones. That mission has led me to travel to Asia four times since becoming secretary of defense in July 2011.

It has led us to devote more resources and effort to building our partners’ capabilities and improving interoperability between the U.S. military and forces in the region. We are also working to identify opportunities to deepen our cooperation in information security, intelligence, surveillance and reconnaissance, and other high-tech frontiers - from cyberspace to outer space. For example, we are developing a new bilateral plan for the U.S.-Japanese alliance’s future roles, missions and capabilities, and reached an agreement to position an additional missile-defense radar to protect against the North Korean threat. On my recent visit to Australia, we signed an agreement to relocate a space surveillance radar to Western Australia. And, in South Korea, our Strategic Alliance 2015 agreement charts a course for the future across a range of fronts, including cooperation in space and cyberspace, intelligence and information sharing, and command arrangements.

Moreover, America is focused like never before on working with our allies and partners in South and Southeast Asia. With India, we have developed an unprecedented bilateral initiative that will streamline our export processes and deepen our defense trade and co-production. We are also pursuing new areas of cooperation in defense exercises, such as submarine salvage and rescue, reflecting this key partnership’s growing dynamism.

One of the most important ways to enhance alliances and partnerships is through joint training and exercises. During 2012, the U.S. increased both the size and the number of bilateral and multilateral exercises across the Asia-Pacific region.

For example, the Rim of the Pacific (Rimpac) exercise was the largest ever, including more than 42 ships and 25,000 personnel from 22 countries, while the U.S. and China staged their first-ever maritime counter-piracy exercise near the Horn of Africa. In 2013, we will engage for the first time in multilateral military exercises led by Asean, while China has been invited to send ships to Rimpac 2014. In support of this increased engagement - aimed not at establishing new permanent bases, but rather at building stronger allies and partners through a greater rotational presence - the third pillar of America’s rebalancing is to enhance our presence across the Pacific and Indian Oceans. In Northeast Asia, where the U.S. military has traditionally maintained a strong presence, we are modernizing our posture. This year, we deployed F-22s and MV-22 Ospreys to Japan and reached an important agreement to relocate our forces on Okinawa. We continue to develop Guam as a strategic hub, and plan to establish fully capable Marine Air-Ground Task Forces in Japan, Guam and Hawaii. Meanwhile, we are retaining and upgrading U.S. Army capabilities in Korea.

The U.S. military is also rebalancing within the Asia-Pacific region to place more emphasis on new partnerships in Southeast Asia and the Indian Ocean. Last spring, 200 U.S. Marines arrived in Darwin, Australia, for the first six-month rotation to serve and train alongside Australian troops and operate with regional partners. We also increased the number and frequency of U.S. Air Force aircraft rotating through Northern Australia. Finally, we agreed with Singapore to deploy up to four Littoral Combat Ships there on a rotational basis to join it and other countries in the region for exercises, training and responses to challenges.

The final pillar of the U.S. rebalance is force projection. We plan to have 60 percent of our naval fleet based in the Pacific by 2020, and America’s defense budget has preserved, and even boosted, investment in new and more capable assets needed in the Pacific theater.

Our spending plan prioritizes the development and fielding of the newest, most capable technology, including Virginia-class submarines, fifth-generation F-22 and F-35 fighters, P-8 maritime patrol aircraft, new electronic warfare and communications capabilities, and improved precision weapons and cruise missiles. These are some of the capabilities that will maintain our forces’ ability to project power should our access and freedom of action be challenged.

These four pillars reflect the Department of Defense’s comprehensive approach to contributing to a peaceful and prosperous Asia-Pacific region in the 21st century. This rebalance is a long-term strategy, and in 2012 we laid a foundation for its long-term success.

Nevertheless, questions and misperceptions remain. Some have concluded that the rebalance is directed at China. It is not. A key component of the rebalance is a healthy, stable and continuous military-to-military relationship with China, based on sustained and substantive dialogue that enhances our ability to work together and to avoid any kind of miscalculation.

I had a successful visit to China in September, and I am clear-eyed but optimistic about the future of this important military-to-military relationship. As the U.S. seeks stronger defense ties with China and countries throughout the region, we expect and welcome other countries’ efforts to build ties with China and the U.S. alike.

Some argue that instability and turmoil in the Middle East will prevent us from implementing the rebalance. Our new defense strategy and budget makes clear that it will not. The U.S. military is a global force that can walk and chew gum at the same time. Even as we rebalance toward the Asia-Pacific region, we will retain a significant presence in the Middle East to deter aggression and promote stability.

Finally, some question whether, given America’s fiscal constraints, the U.S. military can make the investments necessary to implement the rebalance. To be sure, the U.S. is facing a new fiscal reality, and the defense budget must be reduced by $487 billion over the next decade.

But budgets are about priorities, and we have clearly made the Asia-Pacific region a priority. We have a detailed plan for the rebalance in our budget, and we have made decisions that will make our military more cost-effective, efficient and productive.

America is and always will be a Pacific nation. The U.S. has fought and spilled precious blood to give the nations in the Asia-Pacific the opportunity to achieve prosperity and security. We remain committed to improving the lives of all of those who are part of the Pacific family of nations. The purpose of the rebalance is to fulfill that commitment to the dream of a better and more secure 21st century. Copyright: Project Syndicate, 2012


* The author is the U.S. secretary of defense.