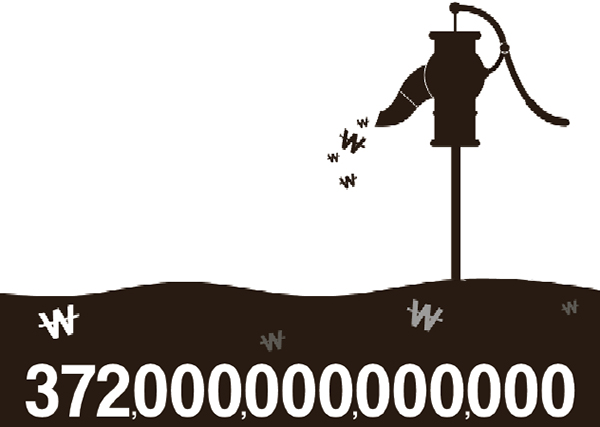 The government is considering trying to shift money from Korea’s shadow economy into the daylight to expedite President-elect Park Geun-hye’s ambitious welfare budget. 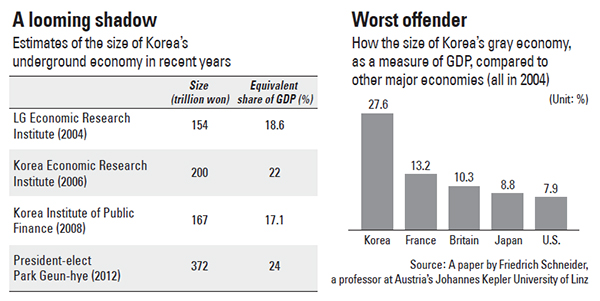 Even though nobody knows the exact size of the former, which refers to economic activities that stealthily avoid taxes, social security payments, labor laws and administrative processes, it is believed to be worth around 370 trillion won ($347.75 billion). This is equivalent to 20 percent of Korea’s GDP.

Park has pledged to spend more than 100 trillion won on welfare.

Seeking recourse to this source of revenue has sparked a debate on the government’s right to access to people’s private information, especially that which concerns individuals’ financial transactions.

Information about financial transactions over 10 million won falls under the control of the Financial Intelligence Unit (FIU).

If the government can legalize 6 percent of the shadow economy, it predicts it can add 1.6 trillion won to its tax revenue every year. Moreover, by increasing surveillance of top earners and conglomerates, Park believes the government can collect 1.4 trillion more a year; in other words, an additional 15 trillion won over the next five years.

Loan sharks, who extort high levels of interest, threaten violence to those who cannot pay and contribute no tax money, are considered the biggest predators controlling the underground economy.

Illegal betting is close behind. Last April, a bundle of bank notes worth 11 billion won was found at a garlic farm in Gimje, North Gyeongsang. It was later found to belong to an illegal betting Web site.

Since 1992, successive governments have attempted to shrink the gray economy by various means: Introducing new systems like one mandating that financial transactions be made using the parties’ real names only; expanding the use of credit cards instead of cash; and issuing cash receipts and tax invoices. However, they have only made a small dent.

Other dishonest practices that have become rampant also feed into the underground economy, such as top earners like doctors and lawyers underreporting their earnings. The National Tax Service assumes that only 60 percent of their earnings go reported, officials working there say.

The government suggested it is loath to raise tax rates to fund Park’s campaign pledges.

“Raising tax rates will only further burden honest taxpayers, while those in the underground economy are not affected,” Finance Minister Bahk Jae-wan said. “The most pressing task is to make sure that everyone pays their taxes fairly.”

Park’s political allies claim the government should be able to access the FIU’s databases to root out hidden financial information and expose tax evaders. The NTS and other government agencies currently have no access to these.

It seems clear that the incoming government will renew past governments’ efforts to bring these into the light.

“We will tighten our monitoring of slush funds at conglomerates and especially those chaebol families that avoid paying inheritance taxes,” said Lee Han-koo, the floor leader of the Saenuri Party.

According to an analysis by a British agency last year, Korea has more slush funds than almost any other country in the world.

Lee, one of the highest-profile champions of exposing tax evaders, has proposed a bill that would give the NTS access to the FIU’s information. The Financial Services Commission (FSC) and Ministry of Strategy and Finance oppose the bill.

NTS Commissioner Lee Hyun-dong is also in favor, saying “the NTS will enhance its scrutiny of both tax avoidance and cash transactions” in his New Year’s address on Wednesday.

The bill aims to prevent tax evasion and grant the NTS access to information about transactions involving large amounts of cash. In the U.S., U.K. and Australia, tax authorities are given direct access to the countries’ FIU databases, according to Lee.

Compared to such advanced countries, Korea’s tax authorities have their hands tied.

However, the FSC and finance ministry say the FIU was established to regulate illegal money laundering and shouldn’t intervene in other matters.

But this lack of cooperation has allowed the country’s underground economy to grow unchecked and at an alarming rate, the lawmaker said.

Experts say the government must first get a handle on the exact size of the underground economy by opening up access to financial transactions and records, including payments to offshore accounts.