Putin to meet Depardieu in Sochi

Putin to meet Depardieu in Sochi 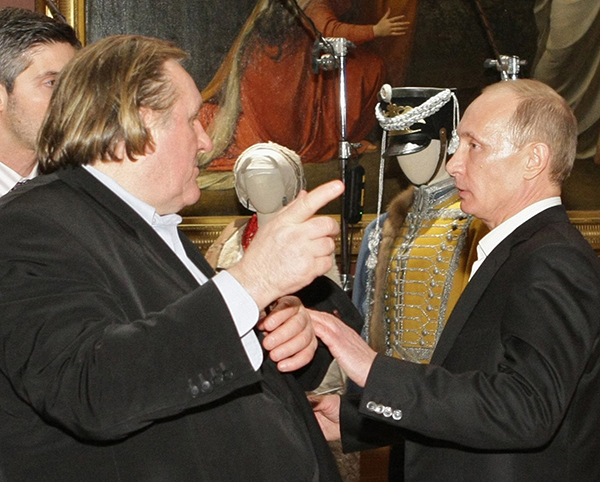 MOSCOW - French film star Gerard Depardieu arrived in Russia on Saturday to meet President Vladimir Putin, who granted him citizenship after a public spat in France over his efforts to avoid a potential 75 percent income tax.

Putin’s spokesman Dmitry Peskov said the two would meet in the Black Sea resort of Sochi, where Putin was spending part of the 10-day New Year and Russian Orthodox Christmas holiday.

He said it was possible Putin would hand Depardieu his Russian passport during the meeting.

“It is a private meeting, we will not be releasing any other details,” Peskov said by phone.

Russian media quoted him as saying the meeting would take place on Saturday. Depardieu’s spokesman could not immediately be reached for comment.

On Thursday, the Kremlin announced that Putin had signed a decree granting Russian citizenship to Depardieu, who objected to Socialist President Francois Hollande’s plan to impose a 75 percent tax rate on millionaires.

Depardieu is a popular figure in Russia, where he has appeared in many advertising campaigns, including for ketchup. He also worked there in 2011 on a film about the eccentric Russian monk Grigory Rasputin. The star of the movies “Cyrano de Bergerac” and “Green Card” was also among the Western celebrities invited in 2012 to celebrate the birthday of Ramzan Kadyrov, the Kremlin-backed strongman of Russia’s Chechnya province who is accused by rights groups of crushing dissent.

Some of Putin’s critics called the passport move a stunt and pointed out that Putin last month announced a campaign to prevent rich Russians keeping their money offshore.

At a press conference on Dec. 20 during which he offered Depardieu a passport, Putin said Russia had a close, special relationship with France and that he had developed warm ties with the actor, even though they had rarely met. But Moscow suffered a blow in November when it was forced to suspend its bid to build an Orthodox church with five domes in the heart of Paris, whose mayor called the plan “ostentatious.”

Russia has a flat-rate income tax of 13 percent compared to the 75 percent rate that French President Francois Hollande wants to introduce on income over 1 million euros ($1.32 million).

Depardieu has already bought a house in Belgium to establish Belgian residency in protest at Hollande’s tax plans. Hollande’s original proposal was struck down by France’s Constitutional Court in December, but he has pledged to press ahead with a redrafted tax on the wealthy.