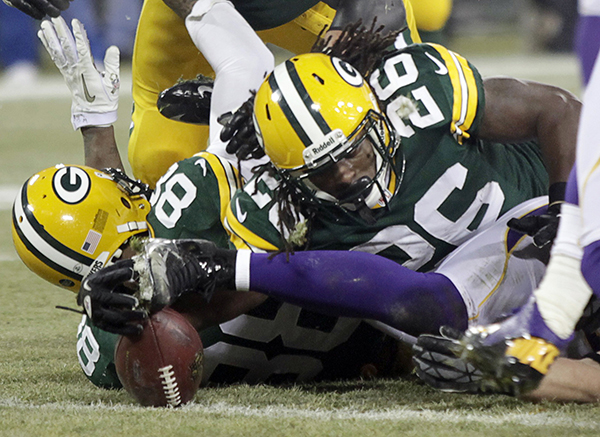 
The Green Bay Packers and Houston Texans both won their NFL wild-card playoff games on Saturday, and both now have scores to settle in their upcoming matches.

Green Bay routed the Minnesota Vikings 24-10, setting up a trip to San Francisco. The 49ers beat the Packers at Lambeau Field to open the season.

The Texans beat the Cincinnati Bengals 19-13 and are heading back to New England, where their season began to unravel with a heavy loss to the Patriots last month.

Houston lost three of its last four regular-season games to blow home-field advantage in the conference, slipping to third overall.

“I’m not a big believer in momentum,” Houston’s Arian Foster said. “Every Sunday you have to come out and bring your best or you can get beat on any day.”

Adrian Peterson and the Vikings didn’t bring their best to Green Bay. One week after he rushed for 199 yards to lift Minnesota into the playoffs, the 2,000-yard runner was held to 99. And Vikings quarterback Christian Ponder was sidelined by an elbow injury; backup Joe Webb couldn’t manufacture much offense.

On Sunday, the Beltway will be buzzing. First, the AFC North champion Baltimore Ravens host the Indianapolis Colts. Then the NFC East-winning Washington Redskins play the Seattle Seahawks.

While Houston heads to Foxborough next weekend, AFC West winner Denver (13-3) will host either Baltimore or Indianapolis next Saturday. NFC South champ Atlanta (13-3) gets either the Redskins or Seahawks next Sunday.

Ten Green Bay receivers caught passes from Aaron Rodgers, tying a playoff record, with Kuhn scoring on a 9-yarder. DeJuan Harris also had a 9-yard TD run, and Green Bay kept Peterson in check. It was a turnaround from what the star running back did in his last trip to Lambeau, when he rushed for 210 yards.

Minnesota’s late touchdown was a 50-yard pass to Michael Jenkins.

Next, the Packers get the Niners, who won 30-22 at Lambeau to start the season. San Francisco is a narrow favorite with bookmakers.

“They’re different as well,” Rodgers said. “They’re a great defense. Very talented offense as well. It’s going to be a very tough challenge for us.”

Houston’s Foster gained 140 yards against the Bengals, becoming the first player with at least 100 yards rushing in his first three postseason games. He scored on a 1-yard run and also had eight receptions.

“It only takes one week to turn things around in the NFL and we did that,” said Foster, whose team lost to Minnesota and Indianapolis to slip to the AFC’s third seed.

Cincinnati gained only 198 yards and had 12 first downs. Its touchdown came on Leon Hall’s interception return. “It’s hard to put it into words,” Hall said. “It’s disappointing. I mean, we had a good year, but it didn’t end how we wanted it to and how we planned it to. At the end of the day, they made the plays that won the game for them.”

With a second straight wild-card loss in Houston, the Bengals extended one of the NFL’s longest playoff droughts. They haven’t won a postseason game since the 1990 season.

They got two field goals from Josh Brown, and Andy Dalton overthrew an open A.J. Green in the end zone late in the fourth quarter.

Along with Foster’s touchdown, the Texans got four field goals from Shayne Graham.