Richardson, Schmidt press on with trip to North

Richardson, Schmidt press on with trip to North 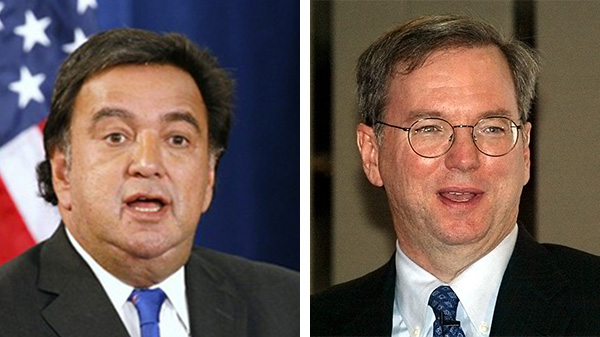 Richardson, a veteran troubleshooter on North Korea, will hold a press conference at the airport in Beijing on Thursday, his office said in a statement, adding that no journalists would be accompanying the delegation.

The U.S. State Department has voiced concerns about the trip, saying it was ill-timed in the wake of Pyongyang’s widely condemned rocket launch last month.

Richardson has said the trip is linked to North Korea’s arrest late last year and planned prosecution of a U.S. citizen of Korean descent.

The former U.S. ambassador to the United Nations has been to North Korea a number of times in the past 20 years and has been involved in negotiating the release of U.S. citizens detained in the isolated state.

Accompanying the pair will be Richardson’s longtime aide on North Korea, Tony Namkung, Jared Cohen, director of Google Ideas, a think tank run by the California-based Internet giant, and staff, the statement said.

Spokespeople for both Richardson and Schmidt did not immediately respond to requests for further details about the trip.

Richardson said Friday he hoped the trip would be “positive” and dismissed U.S. concerns about the mission, saying it had already been postponed once at Washington’s request and that the State Department should not be “nervous.”

He stressed that he and Schmidt would be traveling as private citizens, representing neither the U.S. government nor Google.

“We will make an assessment and see what comes of our visit. I think it will be positive,” Richardson told CNN.

“We’re not representing the State Department, so they shouldn’t be that nervous,” he said in an earlier interview with CBS.

The son of Kenneth Bae, the detained American, contacted Richardson and asked for his assistance, the former governor said.

The U.S. citizen, who was arrested in November, entered the country as a tourist according to North Korea’s official Korean Central News Agency, which said he had admitted committing a crime against the state.

Pyongyang has in the past agreed to hand over detainees to high-profile delegations led by the likes of former U.S. President Bill Clinton, and some observers suggested it may have requested Schmidt’s participation in this case.

The former New Mexico governor said while a meeting with North Korean leader Kim Jong-un was “very doubtful,” he expected to meet with several senior officials.

Richardson was last in Pyongyang in 2010 when he met North Korea’s chief nuclear negotiator in an attempt to ease tensions after Pyongyang shelled a South Korean border island.