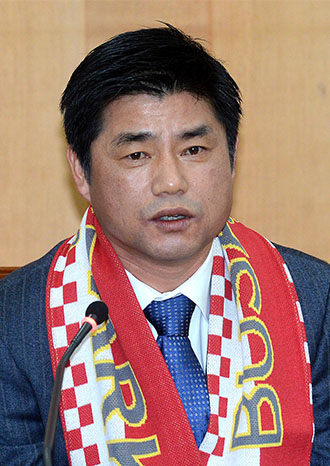 After leading the Suwon Bluewings to a fourth-place finish last season, the elite K-League club dismissed manager Yoon Sung-hyo, who then moved to Busan I’Park. But the 50-year-old coach calls his transition a pleasant homecoming.

Yoon, born in Gimhae, a satellite city of Busan, said in an interview with Ilgan Sports that he is ready to turn the average club into a dark horse.

The last time I’Park won the league was in 1997. The club has finished between fourth and 13th place since 2000. Yoon said he sees Busan as an elite team and aims to lead it to a top-three finish during the 2013 season.

In the first of an Ilgan Sports series of interviews with new managers, Yoon talked about his transition and goals.

Q. Where will you focus your winter training?

A. It is very cold and I am concerned about injuries. My first goal is to get through winter training without injuries this year. Last year, four players got hurt and it got the team off to a bad start.

The winter transfer window is getting interesting, but Busan has stayed quiet. Why?

Busan’s goal is to keep our players. I heard that some other clubs are interested in taking [defender] Kim Chang-soo and [midfielders] Park Jong-woo and Lee Jong-won. We also have good young players who trained well with the club. This is a team strong enough to rank between fourth and sixth place. First we will try join the top split group and then we will aim for third place, which can assure us a berth to the AFC Champions League.

Busan scored only 40 goals last season. It was much less than the 57 goals recorded by Gwangju FC, one of the two relegated teams. How will you fix this?
We will intensify our attack. We will bring in a player who is speedy and is a clutch shooter. William Fernando Da Silva [of Brazil, whom I’Park acquired on Sunday] is a backup striker. We are looking for one striker to start up top.

What was the most difficult thing as the manager of Suwon?

We wanted to win, so I didn’t give many chances to test young players. That’s why I was blamed when winning as well as when losing. I was so hurt by the fans’ criticism, in particular when it was directed at my family. I hope the fans will be more patient with Seo Jung-won [the new Suwon coach].

Busan appears to put less pressure on the results.

There is no pressure for becoming No. 1 in the league.