Advice for the president-elect

Advice for the president-elect 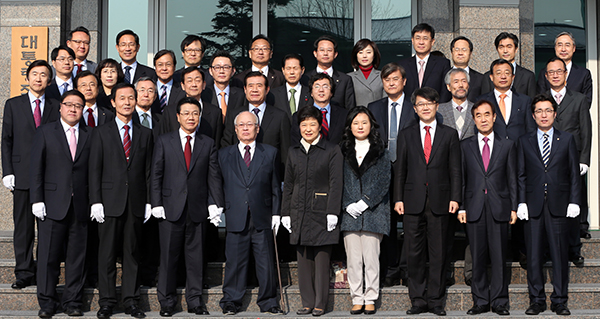 I would like to offer my congratulations on the victory first. People have high hopes for the transition team to set the direction of the incoming administration. Of course, President-elect Park Geun-hye is the leader in charge of state administration, but those who have worked for the election victory will be contemplating the path of the next five years. I would like to give a few words of advice on what the committee should take into consideration and how important your roles are.

The president-elect emphasized her ability to overcome a crisis throughout the campaign. I agree with the diagnosis of the crisis, but I am not so sure if she has a clear picture of how to get through it. It is important to establish clear priorities on resolving the crises.

We need to pay closest attention to the crisis of peace. Once a war breaks out, all the values that the Park administration considers as goals - such as happiness, growth, welfare and integration - will collapse at once. The Korean Peninsula is under a constant threat of a war, but simply stressing “rigorous security” cannot be a solution. Powerful military deterrence and the Korea-U.S. alliance may be able to control temporary peace but cannot bring permanent and stable peace. Now is the time for the efforts to “make” peace for which we are so desperate.

The administration will have to promptly operate the “Korean Peninsula trust process,” one of the president-elect’s campaign promises. I hope Park does not get bound by conditions. She should earn trust through talks first. From the point of Pyongyang, the president-elect is a more charming partner than anyone. Push for humanitarian assistance, economic cooperation and drastic civilian exchanges, including an unconditional resumption of the Mount Kumgang tourism. If Park Geun-hye wants to be remembered as a president of peace, perseverance and consistency undeterred by circumstances and domestic politics are crucial.

The crisis of “accumulation and distribution” is also serious. The president-elect has chosen “stabilization of the livelihood of the public” as a keyword. The vision of accomplishing growth and welfare at the same time and bringing back the legend of “Let’s Live Rich” once again through a creative economy and economic democratization sounds wonderful. However, Park’s aides need to be more modest and realistic as they assist the president on the frontline of economic policy. They should frankly state that a rough journey awaits us rather than offering false rosy predictions.

The prolonged economic slump of the developed world, including the United States and the European Union, is a given fact, and the prospect for the Brics bloc does not seem promising. There are forecasts that it will not be easy to achieve 3 percent annual growth during the next administration.

It would also be hard to boost domestic consumption from the trap of economic polarization. The distribution problem is more serious. Adding more jobs is not an easy task, and welfare promises without tax increases are empty. Without bold promotion of economic democratization, can the administration still accomplish the “restoration of the middle class”? It is their job to have the president-elect calmly study the economic reality.

The “crisis of integration” has become a chronic illness of Korean society, and the president-elect has declared she would become a president who can accomplish grand integration. However, there is no need to get overly obsessed with “fairness” for integration. The president should select and promote the most competent and agreeable people for governmental positions.

The problem is the political rhetoric of giving personal favors to supporters and punishing the opponents. The 48 percent of the people who did not vote for Park must not be excluded just because they have different values and interests. Communication with them is crucial. It is the first step toward integration. The transition committee members should also keep in mind the fact that they are the only ones who can detect and purge those who are eyeing personal interests by encouraging hatred in the name of the president.

Lastly, the committee should pay attention to the “crisis of legitimacy.” The preceding presidents could not be saved from the curse toward the end of the presidential term. The committee must listen to the voices of the people until the last day if it wants to restore the fallen authority of the president and end the vicious cycle of a legitimacy crisis.

Moreover, it is also the committee’s job to check the abuse of power and corruption by the powerful figures of the administration as well as the family and friends of the president. It should help the president visit the fields of social discord such as irregular employment, fired workers and journalists and the Gangjeong Naval Base issue and resolve the problems with “motherly leadership.” The committee’s frank and straight counsel is the key to making the president-elect a successful leader with common sense and reasoning.


* The author is a political science professor at Yonsei University.