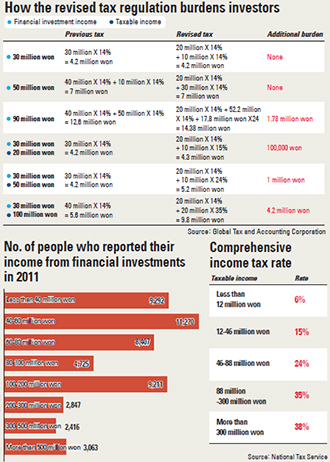 A 61-year-old surnamed Lee has managed to get by fairly comfortably on the 2 million won ($1,880) he has been receiving in monthly interest from his long-term deposit account ever since he retired in 2008.

But he was alarmed to learn that a revised income tax law which took effect on Jan. 1 may cut into his earnings. The revision, which was passed by the National Assembly at the end of 2012, lowers the taxable income on financial investments - including interest - from previous 40 million won to 20 million won a year.

As Lee earns 24 million won a year, he fears some of this will now be taxed.

“The revised bill means I have to pay more taxes at a time when interest on my account is already shrinking because of the government’s low-interest policy,” Lee said. 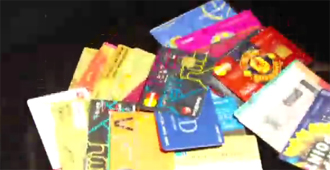 The lowering of taxable income on profits made from investing in financial products is creating confusion among investors as they worry about higher tax payments, especially at a time when their income from such investments is already declining.

However, market experts say the burden will not be too heavy for most investors as the government is mostly targeting those with large investments in financial products.

Like Lee, many retirees and other who have invested in financial products either rushed to their local branch or immediately picked up the phone to inquire about whether they would have to pay more taxes after hearing that the bill had been passed.

As inquiries continued to flood in late last week, Yoo Sang-hoon, the head of Shinhan Bank’s private banking center in wealthy Yeoksam District in southern Seoul, said he had no time to take a coffee break during his working hours. The private banking center even extended its opening hours from 4 p.m. to 6 p.m.

“Some customers have complained and asked how the government could suddenly change the threshold on taxable income,” Yoo said. “Some of our wealthy clients have started calling Dec. 31, the day the bill was passed, ‘Black Monday.’?”

Industry sources say many are now trying to have part of their investments listed under names of their children or relatives to skirt the law. Under the current law, a husband or wife can transfer financial products worth a total of 600 million won to their spouse without paying any additional tax on this transfer of wealth as long as it is done within 10 years of them first acquiring it. The limit from parents to offspring is 30 million won, or 15 million won if transferred to children under 19.

“There have been a lot of inquiries about this,” said Choi Yong-joon at local accounting firm Dasol.

Some investors are already canceling their savings accounts.

Market experts say those who rely entirely on interest from their financial products to survive need not worry, especially if such interest and dividend payments do not exceed 70 million won or so.

“A comprehensive tax rate of 24 percent or more is applied to those whose annual wages exceed 70 million won and whose income from their financial investments is 20 million won or more,” said an official at the Ministry of Strategy and Finance. “But for those on a lower wage, the tax burden won’t be much different from before.”