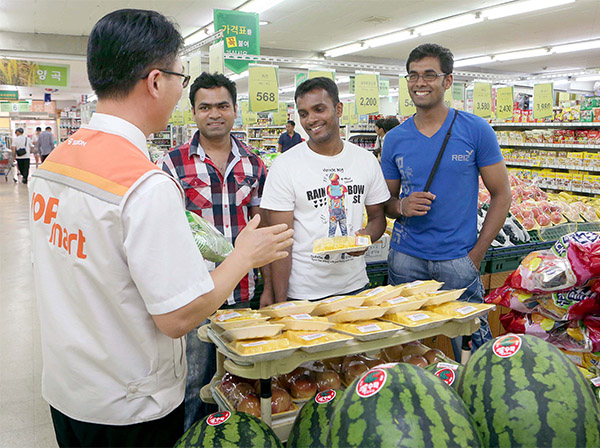 A member of the Korean Provincial Reconstruction Team in Charikar, Afghanistan, instructs Afghan children at the base’s cultural center. Provided by the Ministry of Foreign Affairs and Trade


“There are still deep wounds from the war, but hopes and dreams are not dead words in Afghanistan.”

Last month, a group of Korean diplomats, nurses, translators and volunteers who have promoted military-civic activities in war-torn Afghanistan released an essay collection that contains stories of their efforts to spread hope.

The collection, titled “We Have All Seen the Weeping Child,” is the work of 13 members of the Korean Provincial Reconstruction Team (PRT) including Yeo Seung-bae, the team’s representative; Choi Jang-hun, the vice representative; and Joo Yoon-jung and Lim Won-hyuk, volunteers from the Korea International Cooperation Agency.

The 13 PRT members were together at the base in Afghanistan for about one year from September 2011.

In July 2010, the Korean government constructed a PRT base in Charikar, the capital of central Parwan Province, and deployed some 500 civilians and police in the area to provide local residents with police training programs and various medical services.

The PRT built a training center and a hospital during its reconstruction mission. The PRT was stationed for more than two years until the Korean government handed over its base to the Afghan government last month. Most PRT workers returned to Korea by the end of last year.

“We didn’t send combat troops [to Afghanistan] like the United States nor did we provide large amounts of assistance funding,” Yeo said.

“Rather, we provided humanitarian support for the people by digging a well and treating patients, for example.”

In the collection of essays, the PRT members shared their experiences living in Afghanistan.

Afghan women living under the rule of Taliban were shut out from the world of work and education. The Korean PRT, however, put together an education and cultural training center within the base for girls between the ages of 5 and 9.

It was a small but revolutionary experiment for the PRT.

“Once I saw a weeping child in Afghanistan, and that child to me felt like Afghanistan itself,” Park Da-ha, a PRT member, wrote in her essay. “I approached the child, silently wiped off the tears and told the child that everything would be okay soon. And shortly after, the child smiled brightly.”

“To live a meaningful life isn’t something based on ability but on choice,” said another writer. “If I make a meaningful resolution, I can [leave my comfort zone] and go to a place where I’m needed.”

The 13 writers decided to spend the royalties made through the essay collection on stationery for children in Afghanistan and the publishing company also promised to donate part of the profits from book sales.