Bae Doo-na takes her career to the clouds

Bae Doo-na takes her career to the clouds 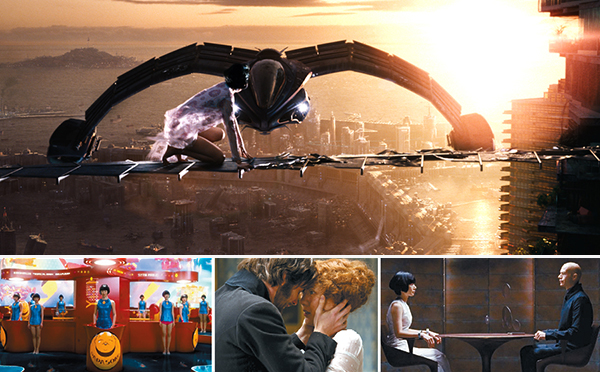 Actress Bae Doona has made her English-language debut in the Hollywood epic “Cloud Atlas“, winning acclaim for her role as the ethereal Sonmi-451.Provided by NEW

The life of Bae Doona reads like a fairy tale. In 1998 at the age of 20, the now 34-year-old actress was scouted on the street to be a model. She was then spotted dozing off in an audition waiting room by director Bong Joon-ho and landed a lead role in Bong’s debut feature “Barking Dogs Never Bite” (2000), which won her the Best New Actress Award at the Blue Dragon Film Awards.

She went on to appear in productions by high-profile directors such as Park Chan-wook’s “Sympathy for Mr. Vengeance” (2002), Bong Joon-ho’s “The Host” (2006), and “Air Doll” (2009) by Japanese filmmaker Hirokazu Koreeda. 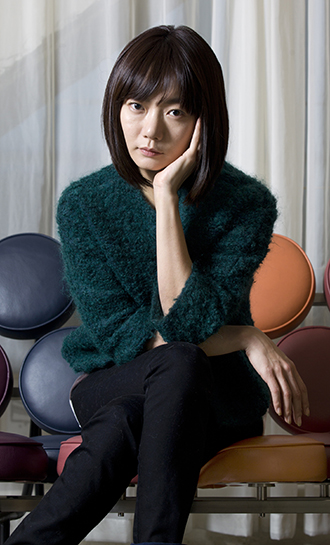 Then last year, more than 10 years into her film career, Hollywood came knocking. The offer was from the filmmaking team known as the Wachowskis, the masterminds behind the “Matrix” trilogy. Having seen Bae’s work, Andy and Lana Wachowski approached her for the role of clone Sonmi-451 in their upcoming sci-fi epic “Cloud Atlas” based on the best-selling novel by David Mitchell.

Lana Wachowski has touted Bae’s performance as riveting and co-star Tom Hanks has said that the Korean actress is “the soul” of the film.

With the movie hitting Korean theaters tomorrow, the actress is still reeling from the whirlwind of the past few months. She says she still wonders how she landed a role in the star-studded fantasy that features such established faces as Tom Hanks, Halle Berry, Hugo Weaving and Hugh Grant.

“I heard that the casting director asked the Wachowskis, ‘What’s the big idea behind this decision?’?” Bae said.

“I can’t figure out what brought them to cast me either. I’m pretty unknown to people abroad and not a native English speaker.”

On the surface, she might come across as a Cinderella-type starlet, but her acting career is marked by unconventional roles. Take her character Hyun-nam in “Barking Dogs Never Bite,” where she helps a middle-aged woman find her little dog that everyone else hated; or Tae-hee in “Take Care of My Cat,” who struggles to escape the psychological traps of middle class life in Korea. Or Young-mi in “Sympathy For Mr. Vengeance,” the impressionable activist youth singing Communist songs and spewing hate on the cultural imperialism of America.

The Korea Joongang Daily sat down with Bae in central Seoul to discuss what the big-budget Hollywood movie means to her and how she believes it will affect her future career.

Q. How many times have you seen “Cloud Atlas” and how did you feel about it?

A. I’ve seen it three times. The first time was in Chicago at a special screening for the entire cast and then at the Toronto International Film Festival, which was the world premiere of the movie. The third time was at the premier in Los Angeles. It was quite amazing. When I played Sonmi, I was preoccupied with the role and had so much to take care of being on my own abroad. So it didn’t sink in that I was co-starring with famous actors in this big project. But when I watched myself appear with those actors, it was just amazing.

You said that you were confident about performing the Sonmi role when you read the script. What made you feel that way?

When I first got the script, I could immediately relate to her, actually. I couldn’t hold back my tears when Sonmi cries. So I just think like Somni, feel like Somni. I don’t always feel like this. I don’t like expressing a character through a verbal explanation, I prefer to just show how I feel through the character. The audience may feel closer to the character with their hearts when I act. I thought Sonmi is the kind of role where I can express how I relate to her.

What did you focus on while playing Somni?

Sonmi transforms herself from a fragile, innocent clone into a strong revolutionary. So, it was important to bear both fragility and strength at the same time. The movie also highlights a romantic relationship with Hae-joo (Jim Sturgess). I tried to play Sonmi as falling in love with the rebellion and establishing herself as a revolutionary operative.

Do you have anything in common with Sonmi?

The point that she loves a kind man? (Laughs.) I like a warm-hearted person because I’m a little cold.

Have you significantly changed at all after “Cloud Atlas?”

I feel a sense of pride and satisfaction about having completed the film because I was totally on my own and did everything by myself without a manager. I thought I had developed my career in a sheltered and favorable environment because I was lucky with one role leading to another. So, everything felt naturally achieved rather than going out and getting it myself. A series of choices I made led me to the next step. I recorded an audition tape with my brother’s help and sent e-mails to producers.

And it was really great to meet a lot of nice, warm people. All the cast, staff and directors were really gentle and nice. It’s kind of the first time in my 15-year career that everyone involved in a movie have been such a great people.

Which scenes did you record?

There were two scenes. They were the scenes with the Archivist in the interrogation room, explaining the day-to-day tasks of clones and the other one after I see the slaughterhouse where the clones are dead. There was actually no difference when doing the real shooting for the scenes.

How did you feel when you heard such acclaimed directors strongly recommended you for the role?

I still can’t figure out what it is about me that made them so sure. ... Andy told people, “She’s from another planet.” I don’t know what that means exactly, but I take it as a compliment. (Laughs.)

You can take on different roles in a movie but playing different races is something unique. I tried to enjoy every second. When playing the Mexican woman, the fat suit was really tight but it couldn’t have been more exciting. What I hate most as an actress is playing the same role over and over. Director Tom Tykwer asked me if I could take on the Mexican woman, considering my calm and shy look. I said I could do it and tried my best to master a Spanish accent by practicing with video clips of anguished Spanish women that I got from the director.

Were there any of your Hollywood co-stars who were different in person than you expected?

That’s Halle Berry. She was so gentle and mild. I thought she will be more strict and charismatic like her character Louisa Rey. She’s the nicest actress I’ve ever met.

There’s a widespread view that “Cloud Atlas” fails to live up to expectations. How do you feel about that?

But there are some reviews that highly praise the movie. Likes and dislikes about the film are very pronounced and I prefer a movie that divides opinion over a “stable” one. That’s more meaningful.

About 10 years ago, you said the upcoming 10 years would be very busy as you built your career. How do you expect the next 10 years to be?

I can’t say I’ll appear in a number of movies going forward. I’m sure I’ll star in a movie that I can feel proud of but these days, I sometimes fear that life as an actress overshadows ordinary life as Bae Doona the woman. My goal is to keep the balance.